Published Date: 28 October 2008
By Petula Martyn
A LIMERICK-based athlete won the hearts of supporters at the Dublin marathon yesterday when he broke a world record for the fastest marathon ever completed on crutches.
There were huge cheers from the crowd when Simon Baker crossed the finish line after completing the course in six hours and 47 minutes, smashing the record by 26 minutes.

The awe-inspiring achievement has earned the 41-year-old a listing in the Guinness Book of Records.

Simon, who is originally from London but who has made Castletroy his home, was one of almost 12,000 competitors to take part in yesterday's event.

Unlike the previous record holder, Simon ran the entire 26 miles 385 yards without the assistance of a prosthetic leg, relying only on his one remaining leg and a pair of crutches.

He lost his leg in a workplace accident four years ago and recently decided to turn his misfortune around and set about raising badly needed funds for Irish based charity, the Bubble Gum Club.

Speaking to the Limerick Leader before the marathon, Simon admitted that he thought his life was over after his leg was amputated.

"It wasn't until I was introduced to some very sick children through the Bubble Gum Club that I realised that losing a leg was absolutely nothing. Running a marathon with one leg is simple compared to what these brave little souls have to deal with every day and anything I can do to help is a pleasure"

The Bubble Gum Club looks after terminally ill children and children in crisis. The charity helps over 2,000 children every year across the country.
Posted by Bernabe at 9:46 AM No comments: 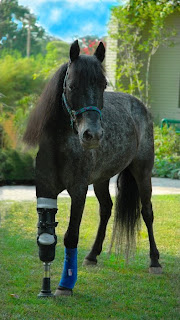 Meet Molly. She's a grey speckled pony who
was abandoned by her owners when Hurricane Katrina hit southern Louisiana . She spent weeks on her own before finally being rescued and taken to a farm where abandoned animals were stockpiled. While there, she was attacked by a pit bull terrier and almost died. Her gnawed right front leg became infected, and her vet went to LSU for help, but LSU was overwhelmed, and this pony was a welfare case.You know how that goes.

But after surgeon Rustin Moore met Molly, he changed his mind He saw how the pony was careful to lie down on different sides so she didn't seem to get sores, and how she allowed people to handle her. She protected her injured leg. She constantly shifted her weight and didn't overload her good leg. She was a smart pony with a serious survival ethic.

Moore agreed to remove her leg below the knee, and a temporary artificial limb was built. Molly walked out of the clinic and her story really begins there.

'This was the right horse and the right owner,' Moore insists. Molly happened to be a one-in-a-million patient. She's tough as nails, but sweet, and she was willing to cope with pain. She made it obvious she understood that she was in trouble. The other important factor, according to Moore, is having a truly committed and compliant owner who is dedicated to providing the daily care required over the lifetime of the horse.

Molly's story turns into a parable for life in post-Katrina Louisiana . The little pony gained weight, and her mane finally felt a comb. A human prosthesis designer built her a leg.

The prosthetic has given Molly a whole new life, Allison Barca DVM, Molly's regular vet, reports.
And she asks for it. She will put her little limb out, and come to you and let you know that she wants you to put it on. Sometimes she wants you to take it off too. And sometimes, Molly gets away from Barca. 'It can be pretty bad when you can't catch a three-legged horse,' she laughs.

Most important of all, Molly has a job now. Kay, the rescue farm owner, started taking Molly to shelters, hospitals, nursing homes, and rehabilitation centers. Anywhere she thought that people needed hope. Wherever Molly went, she showed people her pluck. She inspired people, and she had a good time doing it.

'It's obvious to me that Molly had a bigger role to play in life,? Moore said. 'She survived the hurricane, she survived a horrible injury, and now she is giving hope to others.'
Barca concluded, 'She's not back to normal, but she's going to be better. To me, she could be a symbol for New Orleans itself.

This is Molly's most recent prosthesis. The bottom
photo shows the ground surface that she stands on,
which has a smiley face embossed in it. Wherever
Molly goes, she leaves a smiley hoof print behind.
Forward this and share it with all of the animal
lovers that you know.
Posted by Bernabe at 1:27 PM 1 comment: 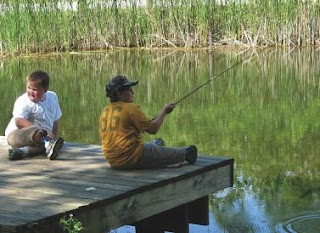 Until Laura Mullen attended the Amputee Coalition of America’s summer camp, the 14-year-old had never met another kid with an amputation.

It’s an opportunity she looks forward to each summer – especially now that the camp has moved to a location near Cincinnati, Laura said.

“I especially like being able to be with amputee kids,” said the Indiana girl. “I could take off my leg anywhere and not have everybody look at me.”

Laura wears a prosthetic leg because of congenital condition that prevented her bones from developing.

The camp is just one of the many services the nonprofit agency provides in Ohio and around the country. The Knoxville, Tenn.-based organization focuses on increasing awareness about amputees in America, advocating for amputees and creating support systems for them.

Three of the 63 campers at the Joy Outdoor Education Center July 20-24 in Clarksville, about 35 miles from Cincinnati, were from Ohio. The coalition rented the camp for one week and spent about $2,000 per camper. The coalition arranges for children from around the country to attend.

Ohio was chosen because coalition staff liked the camp property and also wanted a site in the Midwest to accommodate kids coming from all over the country,

“It’s a great opportunity for kids because at so many other places, they’re not normal.” said Lonnie Nolt, a 30-year-old Columbus man who lost his leg in a motorcycle accident nine years ago. “This is one of the only places where they’re the normal.”

Nolt, who was a counselor at the camp this summer and plans to return, said he was moved when some campers told him, “This week is my favorite vacation of my life.”

Not just camp
In addition to the camps, the coalition also provides peer mentoring opportunities and workshops where amputees can learn skills designed to improve their quality of life. The agency also offers continuing education classes for medical professionals who deal with amputees.

The coalition developed the independent summer camp program in 2002 as an outreach effort for children. The organization also offers a password-protected Web site where young people with amputations can chat with each other online.

The site and the camp offer a place for kids to share thoughts and advice about their medical situations, said Vicki Foster, the manager for outreach and special events for the coalition.

“The focus of the camp is to give these children an opportunity to meet and interact with other children who have similar challenges,” she said.

To help offset costs to the coalition, Parents are asked to donate $500 if they’re able, Foster said.

The camp is open to children ages 10 to 16, she said. Teenagers who are too old to participate as campers are routinely invited to become counselors, Foster said. The practice provides great mentoring opportunities, she said.

Confidence building
Linda Mullen, Laura’s mother, noticed a change in her daughter after her first camp experience three years ago.

“It’s given her more confidence and made her less self conscious,” she said.

Laura, who was one of this year’s campers, said she enjoys the opportunity to hear and see how other campers lead their lives.

Camp was even better this year thanks to the new location east of Cincinnati, she said.

The center had a high ropes course that was accessible to all campers, she said.

“People that have a disability can actually do it,” she said. “You can take as long as you want.”


Melissa Kossler Dutton is a freelance writer based in Bexley.
Posted by Bernabe at 1:46 PM No comments: