Visit msnbc.com for breaking news, world news, and news about the economy

BEIJING – The first time I met Andre Kajlich he was dodging Beijing traffic – in a racing wheelchair.

"Oh yeah, it was good out there," he told me, a huge smile on his face. "You should have seen the look I got from the bus driver."

Kajlich had traveled from his Seattle home to the Chinese capital to take part in the world championship of one of the world's most demanding sports – the paratriathlon. And taking his wheelchair for a spin on the highway was just one of his ways of tuning up.

Kajlich is a double amputee. When he lost his legs in a subway accident eight years ago, doctors doubted he would ever walk again – even with prosthetics. But he was determined to prove them wrong.

"No matter what, I was going to do everything I could do," he said. And entering the grueling world of the triathlon is just his latest challenge, winning a place in the Beijing contest after just one year in the sport.

"It gives you perspective on what you are capable of, really of what everybody's capable of," he told me. "You can choose what you want to do, and once you make up your mind you are going to get there no matter what it takes." 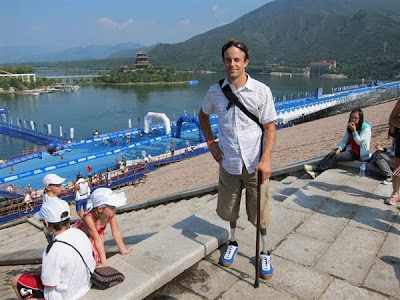 Inspiring others
It's an inspirational message he's been taking to other young American amputees. He and his sister Bianca, an actress, are counselors at the annual Paddy Rosebach youth camp, a summer gathering for 10- to 17-year-old amputees, which was held this year in Clarksville, Ohio.

"I try to get them to look at their goals and to focus on those and to make up their minds, make the same choices I did, that you are going to get there no matter what, and try to put the other stuff aside."

And he told me that he in turn had found the young amputees a huge inspiration as he prepared for Beijing.

The triathlon took place around (and in) the Ming Tombs Reservoir at the foot of the mountains that rise to the north of Beijing. It had been the triathlon venue during the 2008 Olympics.

For more of the story Click here
Posted by Bernabe at 10:51 AM No comments: