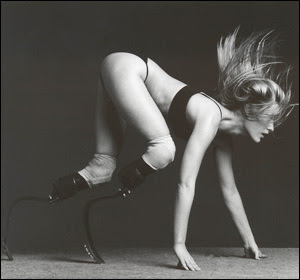 Aimee Mullins(born 1976 in Allentown,Pennsylvania) is an American athlete, actress, and fashion model best known for her extraordinary collegiate-level athletic accomplishments, despite a disability that resulted in the amputation of both of her legs.She was born with fibular hemimelia (missing fibula bones) and had both of her legs amputated below the knee when she was just one year old. While attending Georgetown University she competed against able-bodied athletes in NCAA Division I track and field events and set Paralympic records in 1996 in Atlanta in the 100-meter dash and the long jump. She says she will have realised one of her ambitions when people describe her as "Aimee Mullins, the model", rather than "Aimee Mullins, the disabled model".


Aimee's most recent film project is the upcoming Into the Woods, scheduled for theatrical release in 2010.
Her film debut was a starring role in the highly-acclaimed film by contemporary artist Matthew Barney, Cremaster 3, first presented in the US at the Guggenheim Museum in 2003. Cremaster 3 is "an astonishing work of creativity," and was lauded by The Guardian as "the first truly great piece of cinema to be made in a fine art context since Dali and Bunuel filmed Un Chien Andalou in 1929. It is one of the most imaginative and brilliant achievements in the history of avant-garde cinema."

Aimee first received worldwide media attention as an athlete. Born without fibulae in both legs, Aimee's medical prognosis was bleak; she would never walk and indeed would spend the rest of her life using a wheelchair. In an attempt for an outside chance at independent mobility, doctors amputated both her legs below the knee on her first birthday. The decision paid off. By age two, she had learned to walk on prosthetic legs, and spent her childhood doing the usual athletic activities of her peers: swimming, biking, softball, soccer, and skiing, always alongside "able-bodied" kids.

After graduating high school with honors, Aimee was one of three students in the US chosen for a full academic scholarship from the Department of Defense, and at age 17 became the youngest person to hold a top-secret security clearance at the Pentagon. She worked there as an intelligence analyst during her summer breaks.

It was at this time that she rediscovered her love of competitive sports. While a dean's list student at the prestigious School of Foreign Service at Georgetown University, she set her sights on making the US Team for the 1996 Atlanta Games. She enlisted the expertise of Frank Gagliano, one of the country's most respected track coaches. Through this partnership, she became the first woman with a "disability" to compete in the NCAA, doing so on Georgetown's nationally-ranked Division I track team. Outfitted with woven carbon-fiber prostheses that were modeled after the hind legs of a cheetah, she went on to set World Records in the 100 meter, the 200 meter, and the long jump, sparking a frenzy over the radical design of her prototype sprinting legs. 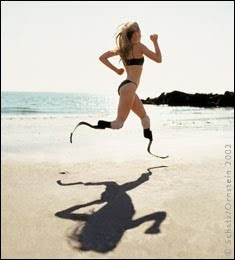 After a profile in Life magazine showcased her in the starting blocks at Atlanta, the world took notice. Aimee soon landed a 10-page feature in the inaugural issue of Sports Illustrated for Women, which led to her accepting numerous invitations to speak at international design conferences. Being introduced to this discourse relating to aesthetic principles, she became interested in issues relating to body image and how fashion advertising impacted standard notions of femininity and beauty. In 1999, Aimee made her runway debut in London at the invitation of one of the world's most celebrated fashion designers, Alexander McQueen. Walking alongside the supermodels of the world, Aimee's groundbreaking, triumphant turn captured the attention of the fashion media, propelling her onto the magazine covers of ID and Dazed and Confused. After making her mark in the fashion magazine standards of Vogue, Harper's Bazaar, W, Glamour, and Elle, she was also named as one of People magazine's "50 Most Beautiful People in the World."

An influential voice in today's culture, she has been named as one of Esquire's "Women We Love," one of Jane magazine's "10 Gutsiest Women," one of Sports Illustrated's "Coolest Girls in Sport," and was celebrated as the "Hottest Muse" in Rolling Stone's annual Hot List. 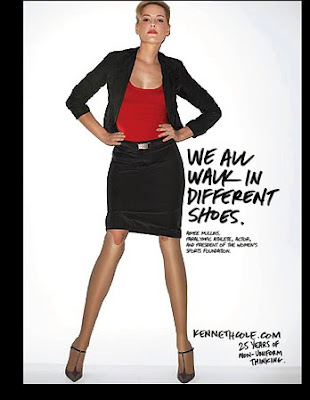 In addition to her professional career, Aimee serves on numerous boards and spends much of her time assisting various non-profit organizations, most notably the Women's Sports Foundation (WSF). Aimee served for years as Vice-President for J.O.B., the nation's oldest non-profit employment service for persons with disabilities, founded in 1947 by Eleanor Roosevelt, Orin Lehman, and others. After serving as a Trustee for the WSF, founded by Billie Jean King, she was elected as the foundation's President, a position she stewarded from 2007 to 2009.

Already at a young age, Aimee's impact on modern society and her influence on future generations is undeniable. Her likeness has been immortalized in exhibits at institutions such as the Smithsonian, the Metropolitan Museum of Art, the NCAA Hall of Fame, the Victoria and Albert Museum, the Tate Modern, the Track and Field Hall of Fame, and the Women's Museum, where she is honored for her contribution to sport among the "Greatest American Women of the 20th Century." She resides in New York City.
Posted by Bernabe at 9:20 AM No comments:

Labels: Aimee Mullins--With The Right Legs You Can't Keep a Good Woman Down

In 1993 Heather Mills, a successful model, was involved in a road accident with a police motorcycle. Her injuries included crushed ribs, punctured lung, multiple fractures of the pelvis and the loss of her left leg below the knee.

Heather, also a successful businesswoman, had already had an extraordinary life story, and it has resulted in her being awarded many outstanding accolades and awards. Former PM John Major presented her with the Gold Award for Outstanding Achievement; The Times presented her with their Human Achievement Award and the British Chamber of Commerce not only named her Outstanding Young Person of the Year but also named an award after her - the Heather Mills Award. For her charity work in 1996 she received a nomination for the Nobel Prize.

Heather had an unusual and traumatic upbringing - her Mother left when she was nine and Heather was left to look after her siblings and Father. By the time she entered her teens she was his full time PA, organising his social events, designing and publicising his various business endeavours. He ended up in prison and Heather left home.

Her first job was at a croissant shop. The Manager specifically said she could eat as much as she liked, she ate 25 in one day and was promptly sacked. She bought the rights to and later sold two American products. First was the ,Stick on Bra, and then came ,Frozen Yoghurts,. She later sold the rights on for a substantial profit.

Heather turned to modeling after winning The Mirror's, Dreamgirl, contest and did this for several years. Due to the unreliable income she set up her most successful business venture, ExSell Management UK and later sold the company for an offer that was too good to refuse.


1990 she went to Yugoslavia for a holiday and moved there permanently. She witnessed the outbreak of Civil War. After which she helped set up a refugee crisis centre travelling from Slovenia to Bosnia-Herzegovina negotiating with military and government agencies for hospitalisation, housing and re-sheltering in the local communities. For two years she commuted between Slovenia and England keeping up her modelling career to earn money to help the refugees. She established the Heather Mills Trust to raise money for the young disabled victims of the war.


After her accident, she instigated a nation-wide appeal for the donation of unwanted prostheses and employed the services of the inmates at Brixton Prison to dismantle the limbs and make them ready for transport. October 1994, just a year after her accident, the first convoy of artificial limbs and medical equipment left for Zagreb. Over 22,000 amputees and victims of landmine explosions have been helped since that convoy. After this, she wrote her autobiography ,Out on a Limb, which landed straight onto The Times best seller list, the proceeds going to the Trust. 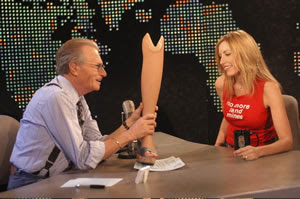 Heather's voice is heard in the media and also the political sphere - in Westminster and the UN she is well respected for her stance on landmines. In addition to the above she has managed to run a half-marathon (in Newcastle), as well as her media, modelling and charity work. She also hopes to work in politics at some point in the future. 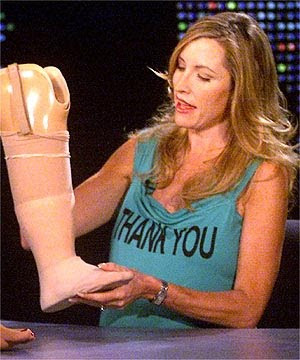 It is heard to believe that someone so young has achieved so much and is continuing to do so. Heather herself sees her accident as happening for a reason, and as well as her charitable achievements, she has brought a motivational tale of remarkable inspiration and hope to many people through her personal appearances and public speaking.
Posted by Bernabe at 10:45 AM 3 comments: