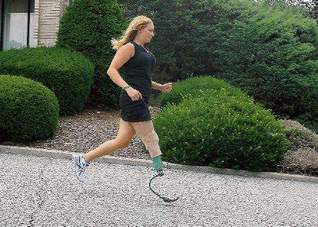 
Scaling 30-foot walls can be tricky, but Artesi, of Lincoln Park, is careful to navigate the artificial hand and footholds. And pressure under her right shoe is a telltale sign that her prosthetic foot has found its mark.

"With a harder route, the (rocks) are smaller and farther apart," said Artesi, 29. "It happens sometimes that I can't do it and I slip off."

But the Rockaway native has committed to climbing a few hours a week in preparation for her first Extremity Games -- an extreme amateur athletic competition for amputees or individuals with limb disabilities.

The event will begin on Thursday in Michigan, and Artesi will compete in the top rope rock climbing competition in Pontiac on Friday. Top rope uses a belayer, or the person holding the rope, to secure a climber.

"Hopefully I'll do well, but I want to have a good time and have it be a learning experience, too," Artesi said.

"There are no other amputees at the gym, so I don't know what to expect ... Maybe next year it'll be different and I'll push (my competitive edge) up."

Artesi, who was 15 when she lost her right leg below the knee in a train accident in Morristown, learned of the Extremity Games through her employer, Garden State Orthopaedics.

Eager to meet amputees from across the country, Artesi -- who has worked as an orthotist, fitting patients with braces for the past six years -- booked her trip and began a regular schedule at the Fairfield gym with her husband, Steven Pezzetta.

Garden State, which has offices in Oakland and Morristown, is sponsoring her trip to the Midwest.

"I really wanted to go," she said. "I had just heard wonderful things from people, colleagues who've been there. You meet so many other people, amputees, people my own age. Working here, I meet a lot of amputees, but they're not always my own age."

The Extremity Games, which is similar to the X Games, was created in 2006 in Orlando, Fla., by College Park Industries, a manufacturer of prosthetic feet, said Beth Geno, the Games' development manager.

Competitors from the United States, England, Germany and Holland vie for gold, silver and bronze medals, as well as prizes and money in many sports, categories and styles, Geno said.

Instructional clinics for newcomers also are held, along with an interactive exhibit area and featured demonstration sports, she said.

Approximately 120 athletes are expected to participate this year, and rock climbing and kayaking are the top two sports for participants, she said.

"We see many new faces, as well as many returning athletes," Geno said.

While the Extremity Games will be Artesi's first challenge in rock climbing, it won't be her first venture into competitive sports. She has participated in various 5K and 10K races as a runner, and taken up tennis and swimming over the past few years.

With running, Artesi dons a Flex-Run, a prosthesis specifically designed for the task. Swimming requires a waterproof prosthesis, but rock climbing allows her to use an everyday prosthesis protected by her climbing shoe.

"I have a whole bunch of different legs," Artesi quipped. "All you really want for the rock climbing is to have a stiff toe."

Artesi will be joined and cheered on in Michigan by Sharon Andrews, her prosthetist for the past five years and her co-worker at Garden State Orthopaedics.

"I'm really, really excited," said Andrews. "I think it's going to be awesome just to see her climbing up the wall. Even if she just doesn't win, it's just a big statement to be able to go."

Andrews and Louis Haberman, Artesi's first prosthetist, have ensured that the suction socket of Artesi's prosthesis fits properly over her stump throughout her training.

On average, amputees receive new prostheses every few years because of changes to the residual limb with weight loss or gain, Andrews said. With an athlete like Artesi, prosthesis maintenance is key to her training and performance, she said.

"She needs to maintain the way the socket fits, since her limb is always in flux," Andrews said. "Some days (her limb) can be a little bit bigger than other days ... I often have to tell Brooke to take it easy because she'll work through if something's bothering her."

Artesi's dogged determination is a trait that Haberman, a Denville resident, recalled seeing when he first treated her two weeks after she lost her leg.

A sophomore at Morris Knolls High School in fall 1994, Artesi was boarding a train stopped at the Morristown station on Oct. 23. The train began moving and crushed her right ankle beyond reconstruction, requiring her leg to be amputated below the knee.

Haberman remembered the younger Artesi as an adolescent who demanded her first prosthesis match her colorful platform shoes. Now, she has become a skilled co-worker whose desire to learn about prostheses has manifested into an adult passion for the field, he said. Artesi plans on returning to school in the fall to become a certified prosthetist.

"She went from a defiant teenager with 4-inch multi-colored shoe lifts and orange hair to a demure young woman with professional training and great care for her patients," Haberman said.

"She's just a remarkable lady. She's overcome a lot of hardship and difficulty to achieve success."

Many amputees, Haberman said, receive their prosthesis and attempt to resume their lives to the best of their abilities.

"A lot (of amputees) do not choose the route that (Artesi) has chosen -- to go further and do more. I can't respond to what the motivation is, other than the desire to achieve, overcome and excel," he said. "This is just who she is."

For Artesi, competing at the Extremity Games and taking part in sports, in general, are motivating techniques for her own patients.

"I'm a good role model for our patients to stay active," she said. "They see me and know they can do things, too."
Posted by Bernabe at 10:17 AM

Hiya, That i take a look at your whole writings, store them approaching.
orthopaedic clinic morristown