From one amputee to another: keep the dream alive 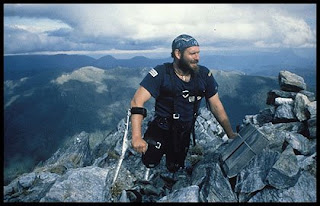 A double leg amputee who has conquered Mount Kilimanjaro has a message for shark attack victim and navy diver Paul de Gelder: the biggest obstacle you will face in achieving future physical feats will be the dimmed expectations of others.

As Able Seaman de Gelder, 31, recovers from the amputation of his leg on Wednesday, Australian Warren Macdonald urged him to find people who believed he could achieve his dreams.

Able Seaman de Gelder, who was attacked by what was believed to be a three-metre bull shark in Sydney Harbour, has said he hopes to resume diving.

"I'm looking forward to rebuilding my life and taking on the new challenges I have to face," he said in a statement. "Ultimately I would like to return to what I love - navy diving."

"He's bang on, in a sense - especially with that level of amputation there's no end of examples of people that have already done that sort of thing - and he can take it to the next level."

"He'll have no problems getting back to diving."

Mr Macdonald, 42, said his own initial feelings after his legs were amputated oscillated between false optimism and despair.

His legs were crushed when a one tonne boulder fell on him during a climbing trip on Hinchinbrook Island in 1997. He was trapped for two days, waiting in agony as his companion hiked back down a mossy mountain for help.

Both legs later had to be amputated at mid thigh.

"Right in the beginning I thought life was pretty much over. I was going to be happy enough to walk out to the mail box," Mr Macdonald said.

"I felt really limited, and thought I wouldn't be able to spend any time in the bush again."

Later, he began to entertain more positive thoughts. "I had naive ideas I could easily get prosthetic legs and walk into the sunset," he said. Continued...

continue story by clicking here!
Posted by Bernabe at 1:39 PM