Jim Abbott: When what's right in front comes from what's been left behind 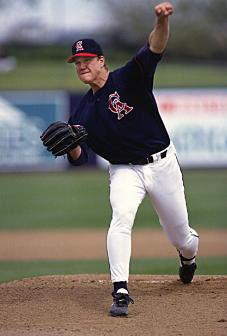 "Some of you may know that my career statistics weren't that great. There were some incredible highlights and some agonizing low lights. The truth is, I won't go to the hall of fame. But if a career can be measured by special moments, lessons learned, and a connection with people then I would stack mine up with oneness. Maybe there is an obligation to share. To try and learn from the experiences life puts us through." - Jim Abbott

Jim Abbott was born on September 19, 1967 in Flint, Michigan without a right hand. This didn’t stop him from always doing his best. He worked hard and overcame every obstacle in his path. From playing in the Olympics to playing in in major league baseball, Jim Abbott never gave up. Through hard work and perseverance, he was able to live just like everyone else and do what many people never get the opportunity to do.
Back to top

Early Life
Jim Abbott started his sports career in high school. He was a pitcher on his school’s baseball team and a quarterback on the school’s football team. In order to play baseball, Jim would balance the glove on his right arm. He would then pitch with his left hand. As part of his follow-through, Jim would slide the glove onto his left arm, enabling him to field any balls that came back. This method would be used by Jim Abbott throughout his career. After high school, Jim was drafted by the Toronto Blue Jays. Instead of taking this offer, he decided to go to the University of Michigan on a full baseball scholarship. From there he would go on to be a fabulous pitcher with a record of 26-8.
Back to top

Amateur Years
After three years at the University of Michigan, Jim Abbott joined the USA baseball team. In 1987, he became the first American pitcher to beat the Cuban team in Cuba. As a result, the United States team got a silver medal at the Pan-American Games. The following year, Jim Abbott was able to go to the 1988 Olympics as an amateur baseball player. Jim pitched a complete, game seven against Japan with a final score of 5-3. By winning this game, Jim Abbott led the USA Team to earn their first gold medal in Olympic Baseball history. Jim Abbott was quite the amateur baseball player.
Back to top 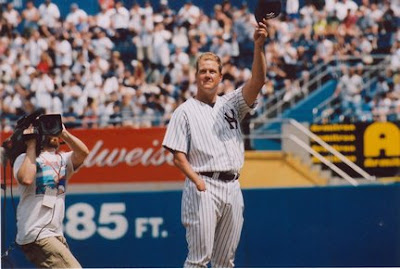 MLB Years
Following the 1999 Olympics, Jim Abbott signed with the California Angels. Abbott continued to play baseball for ten years. Over the course of the years Jim was a teammate with the California Angels, New York Yankees, Chicago White Sox, and Milwaukee Brewers. Jim achieved many accomplishments as a major league pitcher. In 1993, for example, he pitched a no-hitter at Yankee Stadium while wearing pinstripes. This was the first time any pitcher had pitched a no-hitter in Yankee Stadium for the last ten years. In another game, Jim Abbott had a thirteen strike-out game! He accomplished much as a major league pitcher.
Back to top


Conclusion
Jim Abbott is currently a motivational speaker. He encourages people to do their best and perservere despite hardships and disabilites. Looking back at Jim’s past, it is obvious that he needed perseverance and dedication to make it into the major league. Jim beat the odds and became an inspiration baseball player. Jim Abbott can teach everyone a lesson. Despite differences and challenges, anything is possible. Never give up on your dream because it can come true, just as Jim Abbott’s did.
Back to top
Posted by Bernabe at 10:34 AM