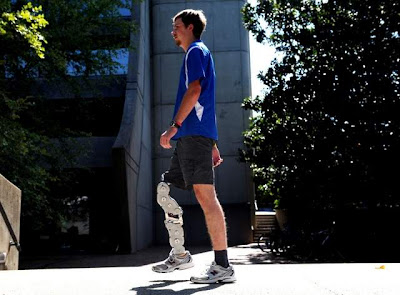 Craig Hutto’s leg was mangled by a 6-foot-long bull shark with a stubborn streak.

Not long before the attack, he’d heard about a Louisiana girl who died from a shark attack just 100 miles away from Cape San Blas, Fla., where Hutto, then 16, and his family were vacationing. But he just wanted to go fishing, so he was standing in murky water when he felt the first bump, then the agonizing bite. The shark seemed impervious as Hutto’s brother pounded away at its nose with a rod and reel.

Hours later, Hutto lay in a Panama City hospital bed, pleading that his mangled right leg be saved. No leg meant no varsity basketball. No spring baseball. No independence.

But doctors ultimately ruled in favor of life over his lifeless limb, amputating five inches above the knee.

Six years later, Hutto’s life is different from the one he planned. But he feels closer to his family. He’s a few months shy of his bachelor’s degree in nursing from Middle Tennessee State University — a path he never would have taken without that shark’s intervention. And he’s serving as test pilot for a robotic leg being developed at Vanderbilt University, his effort to make life better for the nation’s rising number of amputees.

“I was planning on doing computer science when I went to college,” he said. “Then this happened to me, and I realized these people saved my life and I have to do something to pay them back.”

As a lab assistant at Vanderbilt, Hutto, now 23, works with professor of mechanical engineering Michael Goldfarb and his team of researchers. The leg he’s testing is the first of its kind. It makes it easier for Hutto to walk up slopes and stairs because a computer chip activates an electronic calf muscle.

The leg also makes it easier for Hutto to stay standing because it responds to sudden shifts in motion the way non-mechanized prostheses don’t.

“When it goes on the market, I can tell myself I experienced the falls and mishaps to get it where it is today,” he said.

The robotic leg weighs about 9 pounds and features programmable software that responds to Hutto’s movement. It can tell when he’s trying to sit or stand, or when he needs extra help to walk up stairs. He has been testing the leg for four years, weighs in on the leg’s functionality and gives researchers feedback on any issues that may arise.

Hutto also reviews other studies and literature about prostheses for the team.
Continue story click here
Posted by Bernabe at 11:31 AM