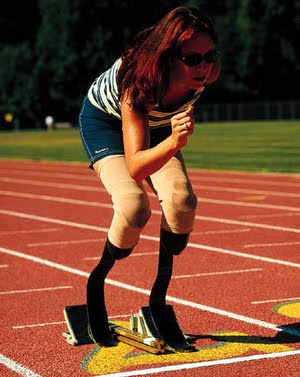 TEMPE, Ariz. -- Thousands of runners will converge on Tempe this weekend for the 10th annual P.F. Chang's Rock 'n' Roll Marathon and Half Marathon. One woman may be an inspiration to others as she runs the half-marathon -- double-below knee amputee Jami Goldman-Marseilles. The 43-year-old Paralympian, who grew up in the Valley, survived a blizzard 25 years ago at the cost of her feet. "I was driving home to Phoenix from New Mexico, and wound up taking a wrong turn and getting lost," she said. "My girlfriend Lisa (Barzano) and I lived in our car for 11 days." The pair were near the Sunrise ski resort in the White Mountains in late December 1987. The road was supposed to be closed for the winter, but Goldman-Marseilles said it was open when she started driving on it. Because the road was closed, neither family nor police searched there. The young women drank melted snow to stay alive while their extremities were being devastated by frostbite. The two were rescued Jan. 2, 1988, found by a man and his son on a snowmobile. Barzano lost several toes to gangrene. For Goldman-Marseilles, the news would be worse. "After about two weeks, doctors started talking about amputation (of her feet)," she said. Shortly after surgery, Goldman-Marseilles said doctors told her it was important that she get some exercise. She worked hard, and later was inspired by the 1996 Paralympics. "I saw video of these incredible athletes running on these crazy looking (prosthetic) legs called the 'Cheetah Legs.' " Those artificial legs are designed to help amputees with sprinting. Goldman-Marseilles wears a version geared more for long-distance running. The married mother of two, who lives in Southern California, has traveled all over the world telling her story. She has run in three half-marathons. Goldman-Marseilles is not the only physically challenged person who will be running this weekend. "The people who will go the fastest on Sunday will be in wheelchairs out front," said race co-founder Tracy Sundlin. "They are 13 men, that if they have a bad day, will do the race in about 1 hour, 45 minutes. They'll go 4 minutes a mile for 26.2 miles." Like those men, Goldman-Marseilles, refuses to let her physical challenges hold her back. "I've learned over the past 25 years that we need to look at challenges and limitations as blessings," Goldman-Marseilles said. "They can be used to inspire our imaginations and push our body to amazing opportunity." She believes that everyone faces challenges and limitations in life, and offers this suggestion: "Use that adversity that you were given … and run with it." That's what she'll be doing on Sunday.
Posted by Bernabe at 9:27 AM