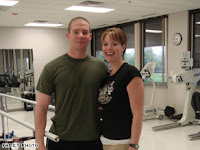 WASHINGTON (CNN) -- Marine Lance Cpl. Joshua Bleill lost both his legs above the knees when a bomb exploded under his Humvee while on patrol in Iraq on October 15, 2006. He has 32 pins in his hip and a 6-inch screw holding his pelvis together.

Joshua Bleill, pictured here with his girlfriend, is walking again with the aid of prosthetics outfitted with Bluetooth.

Now, he's starting to walk again with the help of prosthetic legs outfitted with Bluetooth technology more commonly associated with hands-free cell phones.
"They're the latest and greatest," Bleill said, referring to his groundbreaking artificial legs.
Bleill, 30, is one of two Iraq war veterans, both double leg amputees, to use the Bluetooth prosthetics. Computer chips in each leg send signals to motors in the artificial joints so the knees and ankles move in a coordinated fashion.
Bleill's set of prosthetics have Bluetooth receivers strapped to the ankle area. The Bluetooth device on each leg tells the other leg what it's doing, how it's moving, whether walking, standing or climbing steps, for example.
"They mimic each other, so for stride length, for amount of force coming up, going uphill, downhill and such, they can vary speed and then to stop them again," Bleill told CNN from Walter Reed Army Medical Center, where he's undergoing rehab.
"I will put resistance with my own thigh muscles to slow them down, so I can stop walking, which is always nice." Watch Bleill demonstrate his legs »
Bluetooth is the name for short-range wireless technology that can connect computers to printers, MP3 players to speakers and -- perhaps the most well-known use -- cell phones to ear pieces.
Older models of computer-controlled legs have to be "programmed" via wire by laptop computers before the amputee can use them. Those legs required more movement from the amputee's remaining thigh muscle to generate motion in the prosthetic leg.
Because of built-in motors, the Bluetooth legs allow Bleill to walk longer before he tires.
"We've compared walking several laps in both sets of legs and one, your legs come out burning and tired and these, you know, you sometimes are not even breaking a sweat yet."
Bleill says the technology also means he spends less time in a wheelchair. The Marine uses canes to walk with them. He's hoping to get to the point where he can use one cane regularly, and eventually lose the cane altogether.
"I can walk without canes, but it's not real pretty," he said.
This new generation of prosthetic technology was originally conceived to help amputees who had lost only one leg. But it's working for Bleill and Army Lt.Col. Gregory Gadson, who is also using the Bluetooth devices in his legs.
What they are experiencing will help future amputees.
"We are the first ever to try this, so it's learning day-to-day. The [prosthetics] company comes down on a regular basis and checks in with us," Bleill said.
Gadson, a former linebacker at West Point, said they are breaking new ground for amputees. "I think we are kind of pioneering and hopefully blazing a trail for others to try the technology also," he said.
But the technology is not without some problems.
"It's only going to react to how I move," Bleill said. "Unfortunately, sometimes I don't know those reactions, I don't know what I'm doing to make it react. So sometimes the leg kicks harder than I want it to, or farther, and then I start perpetuating, and I start moving faster than I really want to."
Aside from the Bluetooth technology, Bleill's legs have one other thing in common with a cell phone. They need to be charged overnight. Currently, there are no spare batteries available.
What are his long-range plans?
He just wants to make it back to his home state of Indiana and work for a charity or even help the NFL's Indianapolis Colts.
"They do a lot for the community," he said.
He added he simply wants "to give back."
"To, you know, just carry on a normal life. Go home, see my girlfriend, see my family."
Posted by Bernabe at 8:40 AM