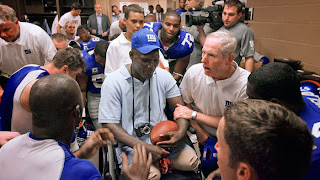 PHOENIX -- To date, the United States has 3,940 confirmed deaths in Iraq. Back in May, U.S. Army Lt. Col. Greg Gadson, a battalion leader, very nearly found himself on that list. An IED (improvised explosive device) thoroughly shattered his body. Only 70 pints of blood, the exceptional field work of men in his 1st Infantry Division and the skill of doctors saved his life.
His legs weren't so fortunate.
The New York Giants, however, consider themselves blessed to have made this double-amputee's acquaintance. They credit Gadson, who played football at Army with New York wide receivers coach Mike Sullivan, with helping to salvage their season and making it something approaching superb. His stirring pregame speeches and his living example of courage and perseverance have inspired them all the way to Super Bowl XLII.
ESPN's Sunday Countdown
Check out Rachel Nichols' report, on Super Bowl Sunday, featuring U.S. Army Lt. Col. Greg Gadson's inspirational impact on the Giants. Sunday Countdown, 11 a.m. ET, ESPN
"I think sometimes I'm given a little too much credit for, quote, being inspirational," Gadson said on Monday in an interview at Walter Reed National Army Medical Center in Washington. "I may be, and if people take inspiration from that I'm glad and I'm grateful. But at the same time, I think I'm just trying to fight, and I'm trying to survive." For more of the story click here.