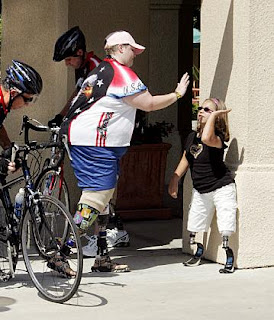 Four riders, all with at least one leg amputated, set off this morning toward New Jersey.
By ELYSSE JAMES
THE ORANGE COUNTY REGISTER
Comments 0| Recommend 3

TUSTIN – Four amputees left Tustin Monday morning on bicycles and headed to Tinton Falls, New Jersey – about 3,500 miles away – with plans to stop at hospitals and amputee support groups to provide inspiration. It's part of the seventh annual Amputees Across America bike ride. They are expected to reach Tinton Falls in early August.

A.J. Johnson, a double amputee, is filling in for Doc Milligan, who sustained a hip injury about a month ago and was unable to ride his bicycle. Johnson lost her second leg to infection last year and was in rehabilitation to learn to walk when she agreed to join the riders.

She plans to learn to ride as the group travels.

"One day I will hit it and be gone," she said of catching the second bicycle pedal. "I do what I can do and I think that's a good message to get out to anybody."

Green, white and magenta balloons framed the podium as the four Amputees Across America riders spoke about their inspiration for the ride and prepared for their journey during a ceremony at the HealthSouth Tustin Rehabilitation Hospital on Yorba Street.

Tustin Councilman Tony Kawashima presented a certificate of appreciation to the riders. About 50 people filled the hospital during the ceremony.

Paige Looney, a 13-year-old who has had both her legs amputated, has been joining the send-off for seven years. This year, Johnson and riders Joe Sapere, Abel Cruz and Lukas Myers gave her a pink Amputees Across America hat and made her an honorary rider.

As they travel across the nation, Looney keeps in touch with them through e-mail. One day, she plans to ride with them.

"They are my favorite guys because I help them a lot," she said with a smile. "They are the best guys. They're just like me."

Sapere formed Amputees Across America in 2002 with HealthSouth Corp. to inspire people. Riders will stop at 26 HealthSouth Rehabilitation Centers, including southern Arizona, central Kentucky and New York. The ride starts in Tustin because, said spokeswoman Lee Fallon, Tustin is centrally located. The other California HealthSouth hospital is in Bakersfield.

Myers, 19, joined the group after his leg had been amputated in 2002. The Amputees Across America visited the Colorado Springs area during the 2003 ride.

"Their attitude on life and hearing their stories and what they do, it changes your attitude," Myers said.