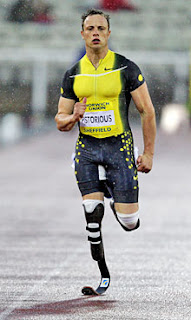 ANDREW YATES / Getty Images
Oscar Pistorius was born without fibulas and had his legs amputated below the knee at 11 months old.

Double-amputee sprinter Oscar Pistorius won his appeal Friday and can compete for a place in the Beijing Olympics.

Oscar Pistorius literally does not have a leg to stand on, but he runs as if he were fleeing a fire.

The world's swiftest amputee sprinter is so fast that he has forced the sports world to wonder whether he's working with a disability or an edge; whether technology has trumped the human condition with advances in prosthetics; and what all of that might mean to races down the road.

The Blade Runner, as Pistorius is known, is where the interests of compassion and competition collide. The 21-year-old South African was born without fibulas and had his legs amputated below the knee at 11 months old. He has adapted so well to his artificial lower limbs, however, particularly to the cutting-edge “Cheetahs” developed in Iceland, that the international track federation (IAAF) has sought to legislate him out of its able-bodied competitions, including the Summer Olympic Games of Beijing.

Pistorius prevailed on appeal last week, but the Court of Arbitration for Sport was careful to frame its decision in the narrow terms of existing evidence rather than setting a broad precedent. Hollywood's “Iron Man” might be fiction, but scientific enhancement is indisputable fact.

“I think the principle is that you have some kind of fairness in competition,” said Dr. Lawrence Hinman, who teaches Ethics at the Frontiers of Science at USD. “The empirical question is: Do the prosthetic limbs give someone an unfair advantage? Eventually, they will. . . .

“My own feeling is to say, unless it's pretty clear that this gives him an unfair advantage, that he should be allowed to compete.”

AdvertisementGerman Professor Gert-Peter Brueggemann, who began testing the J-shaped, carbon-fiber “Cheetahs” for the IAAF last November, says Pistorius' advantage is already significant. Brueggemann's data indicates Pistorius' limbs use 25 percent less energy than able-bodied runners to run at the same speed and that Pistorius requires 30 percent less mechanical work to lift his body.
“I did not expect it to be so clear,” Brueggemann told Die Welt.

What Brueggemann considers to be clear, though, Robert Gailey continues to find murky. Gailey, a physical therapist at the University of Miami, told The New York Times last year that a prosthetic leg returns only about 80 percent of the energy absorbed in a stride, compared with as much as 240 percent for a normal leg. Gailey questions, too, whether the IAAF's concerns are based on competitive advantages or cosmetic appearances.

Unlike Lasik eye surgery or arthroscopic joint repairs, prosthetic limbs are not easily concealed when worn with a track suit. Each of these innovations is intended to enhance performance, but only the prostheses alters a sprinter's silhouette.

“Part of what makes it a little more difficult for Pistorius is the prosthetics look incredibly impressive,” Hinman said. “It's that futuristic design. If they looked like wooden legs, there wouldn't be any question.”

Should Pistorius qualify for the Summer Games, he would become the first amputee to compete in an Olympic track event. Yet it's worth noting that gymnast George Eyser won three gold medals in the 1904 Summer Games in St. Louis while operating on a wooden leg. San Diego State's Marla Runyan, legally blind, became the first Paralympian runner to compete in the Olympic Games and finished eighth in the 1,500 meters in the 2000 Games of Sydney.

“I think the Paralympians kind of get short shrift,” said swimming executive Mike Lewis, who once managed Paralympic sports for the U.S. Olympic Committee. “These are world-class athletes. They train as hard. They have the same level of commitment. It's not merely a feel-good achievement.”

Lewis, who earned degrees from UCSD and San Diego State, admits to being “conflicted” about scientific shortcuts. Yet instead of viewing the technology in isolation, Lewis looks at the totality of the Paralympic athlete's experience, at the “totally different variables” that enter into their equations.

“Biomechanically, there is that purported advantage (to prosthetic limbs),” Lewis said. “But that's for the device itself. At the end of the day, it's the user who sits on top of that device.”

Though he has yet to meet Olympic men's qualifying standards at any distance, Pistorius could still be chosen to represent South Africa in the relays.

“It's genuinely a tough case,” Hinman said. “Even if it didn't (make a decisive difference), he might get better. It's hard to know which you credit to the prosthetic device and what you credit to incredible determination.

“There are plenty of people with that same level of determination who don't get so far.”

Though the race is not always to the swiftest, neither should it be appropriated by the smartest engineer. Much as Oscar Pistorius is an inspiration, he also poses a problem.
Posted by Bernabe at 9:39 AM