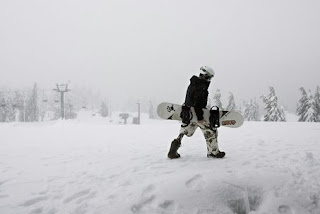 After Cpl. Garrett Jones lost a leg in Iraq in 2007, he told his doctors he hoped to do two things: have a family and snowboard.

A family should be no problem, they told him. The prospects for an above-the-knee amputee to snowboard, however, were nearly nonexistent.

But two years later, Jones is spinning 360s and boosting big airs at Timberline Ski Area, thanks to an Oregon entrepreneur's perseverance and a unique prosthetic knee. With the XT9, amputees can take part in sports such as snowboarding, wakeboarding and telemark skiing.

Seeing Jones blast down the slopes just might change your idea of what's possible for an above-the-knee amputee.

"If I had my pant leg down, you wouldn't know I was an amputee," said Jones, 23, of Newberg, who made some runs at Timberline this week.

The brain behind the XT9 is Jarem Frye of Amity, a hero among many amputees and prosthetics experts. An amputee himself -- he lost a leg to bone cancer at age 14 while growing up in Utah -- Frye, now 30, spent years struggling on the slopes and tinkering in machine shops to develop the knee.

• What: Amity company that makes the XT9 Energy Storing Prosthetic Knee, its only product

• Employees: Owners Jarem and Sara Frye, plus an assistant

• Profitability: Jarem Frye says Symbiotechs has been profitable since 2006, the year it was founded

• The XT9: The knee, retailing for $7,000 to $9,000, is assembled in Amity from parts made in machine shops in Oregon, California, Utah and Montana. It enables above-the-knee amputees, for the first time, to participate in extreme sports.

"At the time I lost my leg, I was really interested in snowboarding," he said, "but I was told there was no way to do that with the amputation."

He learned to "three-track" ski -- on one leg and a pair of crutches fitted with short skis -- and went on to compete at a national level in adaptive ski racing.

Then in 1996, when he was 18, he watched from a ski lift as a telemark skier made graceful turns down the slope below. Tele skiers, who use bindings that keep their heels free, turn by bending their inside knee.

"Without even thinking about it, I said, 'I'd like to try that someday,'" he said. "The other people on the lift looked at me like I was crazy."

Working as a lift operator at Utah's Park City Mountain Resort, he spent $40 for used tele gear, including leather boots with Rollerblade parts. He strapped in his standard prosthetic leg.

"The first time out, my leg fell off," he said. Duct tape fixed that. The larger problem was his walking leg didn't return resistance when he tried to bend his knee to drop into a turn. "That's when I started realizing I was going to have to come up with a device."

He tried to modify his prosthetic leg with an automotive valve from a wrecking yard. Still not enough. Then he fitted a mountain-bike RockShox shock absorber into an old walking knee. With help from a machining student at Brigham Young University, he developed a prototype in 2000 that enabled him to turn as if he had two legs.

Over the next several years, he tried it out on sports such as wakeboarding, snowboarding and rock climbing. Friends and onlookers told him he should market his creation.

He sold a few by word of mouth. Then in 2006, he and his wife moved to Oregon for jobs that quickly fell through. They launched Symbiotechs USA and began selling the XT9 full time. The company sold 30 in 2006 and, Frye said, has sold 120 more since then.

The knee replicates the role of thigh muscles, said James Liston, a prosthetist at Hanger Prosthetics and Orthotics in Salt Lake City. A traditional "walking leg" prosthesis relies on the user to swing it forward with their hip before taking a step. But it can't push back if the user wants to "bend" that leg.

The XTP, in contrast, "resists bending and it actually stores energy and pushes back," Liston said.

The knee is designed for certain sports, so it isn't suitable for everyday use. Frye compares it to walking in a ski boot.

"We don't need to fit every above-the-knee amputee with one, but if there are people who want to do these activities, it's just huge fun," Liston said. "It's so exciting for me, because I've been doing this for 20 years. And things that I thought were impossible I've seen happen."

And the potential market? While many leg amputees have diabetes and probably aren't interested in extreme sports, the National Center for Health Statistics tallied 22,000 above-the-knee leg amputations in 2006, the latest year for which statistics are available.

For people such as Jones, the snowboarding Marine, being able to spend time on Mount Hood is as important as walking.

"It's not the same. It'll never be the same," Jones said. "But snowboarding is my passion, so it doesn't matter. I'm still snowboarding."

Jones returned to Oregon in October from a combat deployment doing intelligence work in Afghanistan. He plans to retire from the Marines in May.

Then he'd like to spend the summer wakeboarding with his XT9 and working on his tricks at Timberline in preparation for adaptive snowboarding competitions.