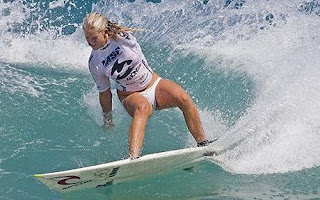 A girl who had her arm bitten off by a shark while surfing has only narrowly lost out on winning the Association of Surfing Professionals (ASP) World Junior Women's Surfing Championships.

Hamilton said of surfing minus one arm: 'I've adapted now and got used to it. It's been five years now so it feels natural.' Photo: REUTERS
Hawaiian Bethany Hamilton was 13 when she was attacked by a 15-foot Tiger shark five years ago.

But the talented youngster refused to quit the sport she loved - despite only being left with one arm to paddle with.

She has overcome her disability to become runner-up in the Association of Surfing Professionals (ASP) World Junior Women's Surfing Championships.

At one point the 18-year-old was in the winning position during the Billabong Pro contest, which was held at Narrabeen in Australia, one of Sydney's best-known surfing beaches.

France's Pauline Ado only pipped her to the title by a narrow margin, but Hamilton was the crowd's favourite for the title.

Before the 18-woman contest she told how she would "love to do well" in the contest, her first attempt to win the junior title.

She said of surfing minus one arm: "I've adapted now and got used to it. It's been five years now so it feels natural."

Despite the success, winning the junior title is just a stepping stone to greater things.

She wants to go on to compete in the main women's ASP tour, which consists of a series of events held throughout the year at the best surfing spots around the globe.

Gary Dunne of surfing company Rip Curl, who sponsors Hamilton, described her as "an inspiration".

He told the Sydney Daily Telegraph: "The reality is losing her arm has made it much more difficult to catch waves but she has learned how to overcome that and is now up there with the best. She has found a way around it.

"The fact she is able to compete and be in the top 20 in the world is phenomenal."

The company was already sponsoring Hamilton when she was attacked: at the time she was considered to be one of the brightest hopes in women's surfing.

Dunne said that she went surfing just three weeks after the attack. He said: "A shark attack is everyone's worst nightmare but she is just someone who loves surfing."
Posted by Bernabe at 11:42 AM