Third time lucky! Mosha the miracle elephant is fitted with another prosthetic leg after landmine tragedy 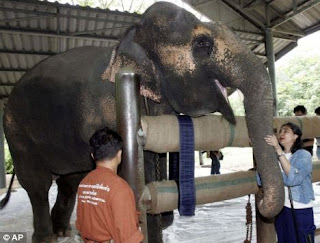 Comments (1) Add to My Stories Victims of landmines come in all shapes and sizes and Mosha the elephant is no exception.
Mosha, a baby elephant from Thailand, became the world's first pachyderm to be fitted with a prosthetic limb in 2007.
But the three-year-old has been growing so quickly she's outgrown two previous artificial legs and is now on her third.
Enlarge Record breaker: Baby elephant Mosha is the first elephant in the world to be fitted with a prosthetic leg - and she's now on her third artificial limb 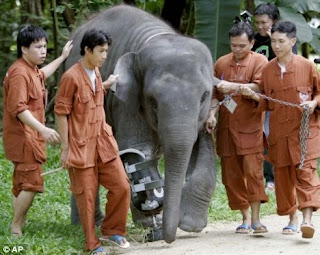 Enlarge Victim: Mosha lost her limb after stepping on a landmine, but has managed to cope perfectly on her artificial leg
Amazingly, Mosha is not the only elephant to be fitted with an artificial limb.
Another landmine victim, Motola, will also receive a prosthetic leg this weekend - 10 years after losing her left leg.

'I do hope she will accept the new leg. It would be wonderful to see Motola and Baby Mosha walking together side-by-side," said Soraida Salvala, secretary general of the charity Friends of the Asian Elephant.
Motola was injured in 1999 while she was working at a logging camp along the Myanmar-Thailand border. The area is known to be covered in land mines.
Her badly injured foot was amputated and the elephant managed to hobble along on three legs after the operation.
Prosthetics for pachyderms: Artificial leg expert Terdchai Cheevakate holds a cast of Motola's injured left leg as they prepare to fit her with her new limb 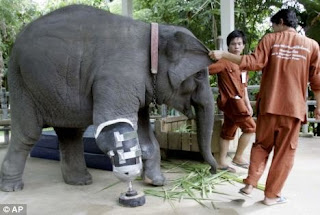 Trunk-tastic: Motola, her injured foot covered by canvas, has learned to use her trunk to lean against the bars of her enclosure. With her new leg being fitted today, she can afford to give her trunk a rest!
She was fitted with a canvas, shoe-like device two years ago, but will receive her own tailor-made artificial leg this weekend.
'It has been 10 years now, but in all these long years Motola enjoyed a happy life, walking out of her shelter for a sun bath,' said Salvala. 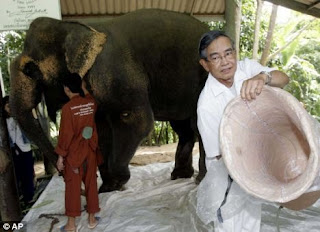 Experts in Thailand have already made casts of Motola's injured left foot for the permanent plastic leg. It must be strong enough to support the 48-year-old's three-ton weight.
Although Motola is the second elephant to receive an artificial leg, she has already been in the record books following her injury.
During the operation to remove her left foot, she received enough anaesthetic to knock out 70 people - a fact that put her into the Guinness Book of World Records in 2000.


Motola's new leg is being constructed by the Prostheses Foundation, an organisation that usually makes cheap but effective artificial limbs for human amputees.
Forever friends: Soraida Salvala comforts Motola before she is fitted for her new leg. Salvala says Motola's story is just one of many injured elephants in Thailand
The injuries of the two elephants have highlighted the difficulties facing the majestic creatures in Thailand. 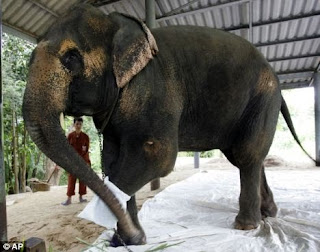 Both are now being cared for at the Elephant Hospital in Northern Thailand. The hospital was set up by the FAE and is the only elephant hospital in the world.
It has treated thousands of elephants for ailments ranging from eye infection to gunshot wounds.
A number of elephants have also been injured by land mines, but the charity says this is just one problem facing the animals in Thailand.

They say the number of domesticated pachyderms has dropped from 13,400 in 1950 to today's estimated 2,500, while the number of wild elephants has also dropped dramatically.

Read more: http://www.dailymail.co.uk/news/article-1206733/Mosha-miracle-elephant-fitted-new-prosthetic-leg-landmine-tragedy.html#ixzz0Pmi5ILAD
Posted by Bernabe at 10:57 AM