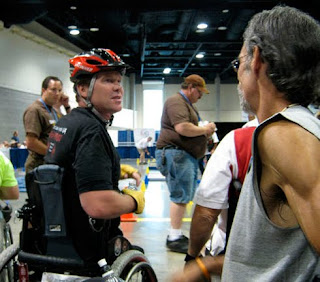 Marine Corp veteran, and Arleta resident, Larry Foster, 50, is a man who enjoys competition and winning, but not as much as he enjoys helping other disabled vets see that life is still full of possibilities. He lost his right leg in a daredevil accident in 1981. A true Marine, Foster coped, adopted and over came.

As previously reported in the San Fernando Valley Sun/El Sol, Foster won a Bronze medal in the Slalom event in the 29th National Veterans Wheelchair Games last month. That's the 17th medal Foster has won in the 12 years since he first began competing in the Games.

Foster's life began to change in the winter of 1996 when he was referred to Dr. Suzan Rayner, director of rehabilitation program at the Sepulveda VA in North Hills. For the previous 16 years, his thoughts dwelt on the things he couldn't do because of the amputation.

Dr. Rayner rejected Foster's notion that the amputation put limits on him. Rayner convinced Foster to join 300 other disabled veterans and go skiing at a winter sports clinic in Colorado. Seeing so many active disabled vets inspired Foster and when he returned, he began training for the Wheel Chair Games. He entered the 1997 San Diego Games and won the gold medal in the air rifle competition. He was very happy and as Foster said, "It was a life changing experience."

In 1999, Foster joined the staff of the Sepulveda Veterans Administration facility. Today he is a Volunteer Service Specialist. He works on some of the disabled outreach programs. One of his current projects is to get Vets involved in Ride-On, a horse facility in the Valley that teaches disabled kids all about horsemanship and getting along with animals. "We're trying to get some of our disabled vets enrolled in the program," Foster said, "We have waivers they have to sign." The Vets also need clearances from their doctors.

Whether on the job or off, Foster makes a point of talking to disabled vets, especially those returning from Afghanistan or Iraq, and letting them know there are possibilities open to them.

As he stated in a previous interview, "That's why I think that I'm still here - to help other people who are going through what I went through," Foster said. "I'd hate for anybody (else) to waste 16 years of their prime in a wheelchair not knowing that there are things out there that they can be doing."

Foster said that self confidence is the key element in helping the disabled live happy and productive lives. "Knowing when the chips are down, you've got that fire inside of you that's going to keep you going. Don't let the fire go out. As long as you keep that going in your heart, you'll be all right."

Through hard work and good timing, Foster has had some extraordinary experiences. He's played at Staples Center during the halftime of a Lakers game and played an exhibition game in Times Square. He's been an extra in the movie "Charlie Wilson's War". In this way, he's been an inspiration to others.

Foster grew up in Quincy, Illinois and graduated from the local high school in 1977. He went to work at Quincy Soy Bean. He was living at home, had a new car, a girl friend, and a great job: A teen's dream. But Foster thought, "It seemed like something was missing."

Some of his friends had gone to college but Foster wasn't ready for that. Co-workers, who were former Marines, talked about life in the Corp. "It just seemed really intriguing," Foster said, "So on my way home from work one day I stopped by the recruiter's office and signed up for six years."


Foster, right, with his bronze metal and unidentified friend.
He went through boot camp in San Diego and was stationed at Camp Pendleton before volunteering for duty in Okinawa. He became part of the famed 1st Battalion 9th Marines (the Walking Dead). He joined the elite SATA (Surveillance and Target Acquisition) Team, graduating 3rd in his class from the Marine Sniper School. He traveled to Australia, New Zealand, New Guinea, Phillippines, Hong Kong, and served on the SS Tripoli. His battalion rotated back to California and he was out in July, 1981. 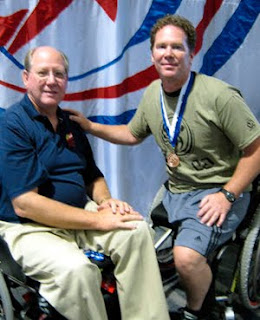 He went home and that's when tragedy struck. He was in the car with some of his friends waiting for the train to pass. Recalling their youth, they decided to go "train surfing." After the train had passed, the friends returned to the car but Foster did not. He believes that a ladder on the side of the train gave way and he fell underneath the train. It cut off his right leg above the knee. Foster has no memory of who called the ambulance or how he survived that night. The doctors had to restart his heart twice. He would eventually get 50 pints of blood and survive nine operations.

Foster said his Marine Corp training helped him survive, "It was one of the factors that saved my life after the accident. The determination, the willpower to survive something like that you have to have a little help." He spent a year undergoing rehabilitation, being fitted for a prosthesis and more rehabilitation. When that process was completed, he went to college to learn graphic design.

He moved to L. A. in 1985 and worked in a Hollywood Ad agency for four years in graphic design doing typesetting until he was replaced by a Mac. The art director came up to him one day and said "'Sorry man, we got to let you go. This does everything that you did and I can do it myself.'So, I went back to school and learned how to do computers and I've been doing that ever since," Foster said. He "hopped around" from job to job, and started his own business, before joining the VA in 1999.

"It seems like a lot of people have forgotten about the war," Foster said. Foster, and the other VA personnel working on the celebration, want the returning veterans to see that they haven't been forgotten. Local dignitaries and the media will be attending, entertainment and food will be provided, there will be a flyby and most importantly, the vets families will be involved. "Getting the families involved is very important. It's a big part of what we do," he said.

The VA tries to help vets in big ways and small. One program will pick up the tab for the vet and his family to out to a nice dinner and then go to Disneyland, or a movie, or a Laker game or a Clipper game, whatever is going on at the time. It's a gesture that makes vets feel good. "I really feel like we're making a difference in our department," Foster said.
Posted by Bernabe at 11:29 AM