Heart of a Champion: The Story of Jean Driscoll 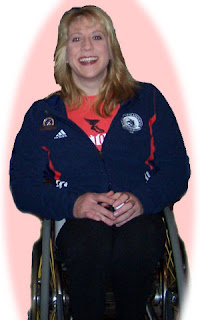 Jean was born in Milwaukee, WI with spina bifida (an open spine). It affected her ability to walk and included other neurological complications as well. Although there were challenges during childhood, her determination to get the most out of life was always there. She began using a wheelchair at the age of 15 and after learning about wheelchair sports from a high school friend, she started pursuing athletic opportunities with fervor. The Milwaukee Public Schools Division of Recreation provided her first wheelchair sports experiences. After being recruited to the University of Illinois at Urbana–Champaign, world-renowned coaches developed her into one of the world’s most successful competitors.

During her career, Jean was the first eight time winner of the Boston Marathon. She set 5 new course records as well as 5 world best times and has held Boston’s fastest time in the women’s wheelchair division since 1990. It currently stands at 1 hour, 34 minutes and 22 seconds for the 26.2 mile distance. In addition to her success in Boston, Jean also won two Olympic medals, 12 Paralympic medals, and still holds the world record in the 10,000 meter (6.2 mile) track event that was set during the 1996 Paralympic Games in Atlanta, Georgia. Jean remains the only 12–time champion of the Lilac Bloomsday 12K Road Race held in Spokane, Washington and still owns the course record in her division from 1995.

Her successes have been celebrated by many. The University of Rhode Island and the Massachusetts School of Law awarded her Honorary Doctorate degrees in 1997 and 2002 respectively. Royal Caribbean Cruise Lines provided Jean with one of its highest honors in 2003 when they named her the Godmother of their Voyager Class Series ship, Mariner of the Seas. She is also in the Fellowship of Christian Athletes’ “Hall of Champions.” and the Wheelchair Sports, USA Hall of Fame.

Jean retired from her successful racing career following the 2000 Paralympic Games in Sydney, Australia. For over 20 years, she has offered encouragement and motivation as a speaker to hundreds of thousands of people worldwide. Through a partnership that began in 2001 with Joni and Friends, Inc., Jean began working with people who have disabilities in Ghana, West Africa. Her alma mater, the University of Illinois, has caught the vision and is now supporting this work as well. In addition to motivational speaking, Jean works as the Associate Director of Development for the College of Applied Health Sciences at the U of I. 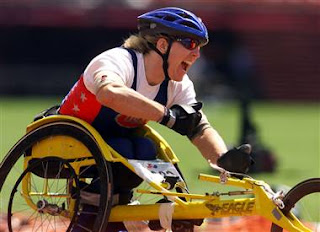 At home, Jean stood out among nondisabled friends and family. An 8-year-old with spina bifida, she used leg braces for mobility.

Counselors at Easter Seals Camp looked to Jean to assist and inspire other campers, which in turn boosted her confidence and self-esteem. For Jean, seeing herself as a leader was an important first step toward becoming a world-class athlete and an international advocate for people with disabilities.

Today, at age 36, Jean acknowledges, “I’ve done a lot in my life that most people only dream of.”

During her career as an elite wheelchair racer, Jean won the Boston Marathon eight times, the only person in the race’s 107-year history, in any division, to achieve that feat. She won two silver medals in Olympic exhibition events and 12 medals in the Paralympics, which are held two weeks after the Olympic Games in the same host city. Jean also holds several world records, and -- among her many honors and awards -- she was named one of the top 25 female athletes of the 20th century by Sports Illustrated for Women magazine.

Now retired from professional competition, Jean is focused on sharing her message about succeeding in all aspects of life. She also works to help others with disabilities benefit from the advantages sports can offer -- an endeavor that has taken Jean to the country of Ghana in West Africa, half a world away from Milwaukee, Wis., where she grew up and first learned to love athletics.

A Setback Followed by a Leap
Jean has spina bifida, a condition characterized by an incomplete closure of the spine at birth. Throughout most of her childhood, Jean was able to walk with leg braces.

A setback occurred during her freshman year in high school, when Jean dislocated her hip riding a bike. It was a serious injury that required five surgeries and a year in a full body cast.

Even after such measures, Jean’s hip became dislocated again. As a result, at age 15, Jean obtained her first wheelchair. Despite confidence gained at Easter Seals camp when she was younger, Jean became depressed. She saw a lifetime of limitations ahead of her.

A year later, Jean’s life took a leap forward when she reluctantly attended a wheelchair soccer practice. “It was real sport,” she recalls. “Wheelchairs were crashing into one another, and I loved the fact the coaches didn’t panic when players fell out of their chairs.”

From that point on, Jean couldn’t get enough of sports. She played soccer, ice hockey, tennis, and basketball and began to appreciate her wheelchair as a vital piece of equipment that enabled her to compete.

“It was like this whole world I’d been trying to get into suddenly opened up to me,” Jean says, “and, ironically, my wheelchair -- which I’d thought was so limiting -- was the key.”

From Recreation to Elite Athletic Competition
Jean’s athletic abilities eventually caught the attention of the University of Illinois, and she was recruited to play wheelchair basketball there. Seeing that Jean also excelled at track events, her college coach encouraged her to compete in marathons. Jean won her first national-level race in 1989 and from there began her professional sporting career.

Besides the rigors of training and the thrill of competing, Jean enjoyed another benefit of being involved in sports. Her attitudes about disability, as well as the attitudes of others, were profoundly affected. “I began to see my disability as a
characteristic, like my hair color,” she says. “My disability doesn’t define who I am.”

Sports can be a powerful vehicle for changing attitudes that limit people with disabilities, Jean found. “Our biggest limitations are the ones we place on ourselves, or that others place on us.”

Spreading the Message and Changing Lives
Today as a professional speaker and author, Jean addresses the topic of failure as much as success. She routinely speaks to corporations and organizations, and her book, Determined to Win, chronicles her story.

“What I try to help others understand is that failure is not the opposite of success, it is part of the process that leads to success,” Jean says. “For example, when you are sore after a workout, it’s because your muscles have developed tiny tears. Once repaired, the muscle is stronger than before. Likewise, after we experience failure, we are stronger, wiser and more prepared to take on life’s challenges.”
Posted by Bernabe at 10:21 AM