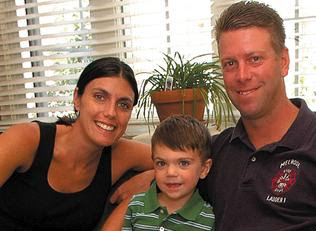 A firefighter regains his strength and mobility
Neil Sullivan
Amputee


It's the love and support of family and friends - including the people of Spaulding - that have made Neil's long road back possible.

Background
In August of 2005, firefighter Neil Sullivan was badly injured when the brakes on a fire truck unexpectedly released, pinning him between two trucks. In spite of efforts to reattach one of his legs during lengthy emergency surgery, one of his legs had to be amputated in order to save his life.
After emerging from a coma, his family decided on Spaulding for his rehabilitative care.

Neil's Story
Jessica Sullivan, Neil's wife:
When Neil met his inpatient therapist Cara, the two immediately hit it off, becoming great friends. Somehow Cara managed to transform the drudgery of rehab sessions into something that was almost fun.
While at Spaulding Neil received a visit from six-year-old David Eustace, who had lost his left leg in a horrific car accident at his elementary school in Stoneham, Massachusetts. At Spaulding, David had learned how to once again run and play baseball with a prosthetic leg. Now he wanted to meet his hero, the fireman. David's enthusiastic attitude - and his racing around the hospital room - were a real inspiration to Neil. 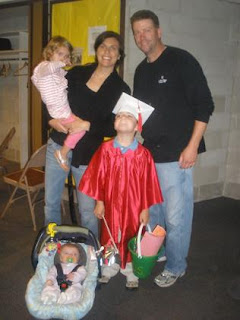 After six-and-a-half weeks at Spaulding, on the day of our third anniversary, Neil came home to our new house, our new son Thomas, and me. He has since continued his rehab, at Spaulding with Allison, his outpatient therapist, who had a tough act to follow in Cara but has shown a similarly high level of dedication in working with Neil. Neil and I have learned that Cara, Allison and the other Spaulding therapists share an incredible passion for what they do. They truly enjoy working with patients and helping them get back into life.

I am so grateful for the treatment Neil has received from Spaulding. It's the love and support of family and friends - including the people of Spaulding - that have made Neil's long road back possible.

For more information:
Amputee Rehabilitation Program
Posted by Bernabe at 11:23 AM