Andrew Bateson: An 'Up and Running' Miracle 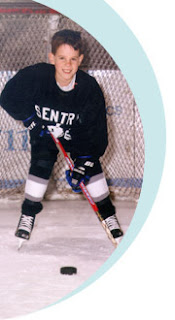 Andrew Bateson is an active 14-year-old. He’s a whiz on the ice and on his bike.

“[For] my dirt bike, I have a Honda,” says Andrew. “I like that because it flies. It goes really fast! I just like hitting the jumps and being in the air.

“Some people treat me differently, and I really don’t like that. If I’m playing a sport they’ll be like, ‘You can sit down whenever you want.’ I want them to be hard on me like the regular kids so when I get older I’ll learn to push myself.”

Andrew lost both of his legs when he was six years old. His parents, Scott and Rebecca, remember just how they felt when they learned that their son would have to endure a double amputation.

“What had I done that God made this happen,” asks Scott. “I guess that was my reaction at first. I must have done something wrong, and this is His way of punishing me because this would be the ultimate way to punish a parent.”

On July 3, 1997, Andrew complained he was hot and tired. The next morning, his parents noticed tiny scratch-like marks on his chest. Rebecca recalls, “The scratches became blotches, and then the blotches moved up and down his chest. They were all on his legs. I was literally watching him turn purple in front of our eyes.”

Bruises developed under Andrew’s skin and began to spread. Scott and Rebecca rushed him to Rhode Island hospital.

Dr. James Linakis was first on the scene in the pediatric emergency room.
“I knew exactly what it was,” says Dr. Linakis. “I’ve seen children die within a matter of hours of the time of presentation.”

Andrew had bacterial meningitis, an infection of the blood and the lining that surrounds the brain. It’s still a mystery just how he contracted the often fatal illness.

“When I heard the word bacterial meningitis, my first feeling was of helplessness,” says Rebecca. “As a mother, your reaction is to want to protect your child. As time went on I realized that this was beyond any miracle lips I had. There was no way I could kiss these boo-boos away.”

“You pray that he lives,” says Scott. “That was really the main prayer that I had at the time. 'Please let my son live. Don’t take him away. He’s too young.'”

Andrew lied in a coma for 23 days. Bacteria set off a toxic reaction in his body, and he went in to kidney failure.

Then doctors realized that no blood was circulating in his legs. They presented Scott and Rebecca with only one option: both legs would have to be amputated.

Family, friends and neighbors took turns praying for Andrew, but to doctors, the situation looked grim.

Dr. Linakis says, “I’ve never seen a child who had that degree of a rash -- with that kind of progression -- survive this disease.”

“I put everything I had into prayer that God was going to help Andrew,” says Scott.

Their church held a prayer and healing service just for Andrew, and on the day of his amputation surgery, Andrew’s lead surgeon gave his parent the news they had been waiting for! Andrew, though still in a coma, would definitely survive!

The young athlete awoke to the realization that he had lost both of his legs.
As Andrew regained his strength, he endured countless hours of physical therapy. Then came the big day. After more than three months in hospital, Andrew went home!

But the homecoming was bittersweet as the six-year-old adjusted to life without legs.

Fast forward eight years. Andrew’s back enjoying the sports he loves! He took a break to show us just how his legs work.

“The first thing that I do in the morning is I get my silicones, which is a rubber type material,” says Andrew. “When I apply it to my leg it sticks on to it. Then there is a pin at the bottom of my leg. I take the leg -- there is a hole at the bottom -- and I have to line the pin with the hole. Then when you hear that (click) noise that means it’s in.”

Scott says, “He just amazes me with some of the things that he goes out and does. He doesn’t think about his legs getting in the way. If he had a problem, he seems to work around it, and he finds a way to do it.”

“What I’ve learned from God is that you can put your faith in Him 100 percent, and He will give you back 100 percent,” Rebecca says. “He was just as unhappy and sad over what happened with Andrew as we were. But He has come forth and given us strength to be the family we are today.”

Since his time in the hospital, Andrew has received a lot of community support. In fact, when local journalist Mark Patinkin picked up on Andrew’s story, he thought he would just write a column about the family’s ordeal. However, when he learned of the Bateson’s tremendous faith and reliance on prayer, he decided instead to write a book – Up and Running.

“When I say I wove faith through this book, it wasn’t just to chronicle faith as a source of comfort to the family,” says Mark. “What struck me -- and still strikes me to this day -- is how faith seemed to play a tangible role even in the medical outcome. I’m not even sure how to fully explain it. I’m a secular journalist. But I will sit here and tell you there was evidence that God’s hand somehow touched this situation.”
Posted by Bernabe at 8:24 AM