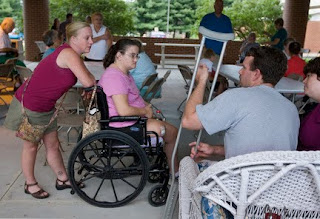 "I want to live life to the fullest," the former Cumberland Valley High School principal said. His next sentence catches some off guard: "And I want to inspire other amputees to do the same."

Unless he’s wearing shorts that show off his prosthetic leg or swimming, which finds his "leg" waiting poolside, it’s not apparent that Nickle is an amputee. Neither his gait nor his attitude calls attention to his disability.

"There is life after amputation. Especially with advances in prosthetics, you can live a productive life," said Nickle, 68, whose prosthetic leg has a vacuum system that pumps air out for comfort and better fit. "There was a time when amputees just went home and that was it, life was done. Not anymore."

About 1.7 million people in the United States are living without a limb, according to the National Limb Loss Information Center. The majority of new amputations occur due to complications of the vascular system, especially from diabetes.

Nickle lost his leg in 2000 when a drunken driver coming home from a Super Bowl party hit him as he was clearing snow around his mailbox. He underwent a 10-hour surgery at Penn State Milton S. Hershey Medical Center that left him with 300 stitches in his head, a metal rod in his right leg and a left leg that ended halfway between his knee and ankle. It took him nearly a year to recover.

Both despair and hope stand out in his mind from that time.

"I was overwhelmed and not sure what was going to happen," the South Middleton Township resident said. "I had always been a person who had some type of control over what I was doing, and here I was, quite helpless."

But he also remembers a man at his bedside who danced a jig and then took off a prosthetic leg and held it up for Nickle to see. At the time, Nickle thought he must be hallucinating from medication.

"The whole thing seemed surreal, but it sent me a message that there was still life after amputation; it gave me hope," Nickle said. A year later, at a meeting of the Amputee Support Team of Central Pennsylvania, Nickle met Mark Leonard, the man who had indeed danced a jig to inspire him to live.

"That implanted in my mind the idea of going out and visiting other amputees. Having support is critical to a person’s recovery," said Nickle, who credits his wife’s encouragement with helping him adjust to life as an amputee. The two are trained peer visitors with the Amputee Coalition of America, even making visits to other states.

"We’re pretty adaptable. We just didn’t let it bother us that much," said Barbara Nickle.

"There are lots of ups and downs, but it does get easier. Losing a leg does not mean that somebody is any less of a person," said Jake Schrom, 21, a Penn State University student from South Middleton Township. His right leg was amputated above the knee last year after a work-related traffic accident.

Schrom, who has a prosthetic leg, said having a goal to work toward makes recovery easier. "Mine was to get back to normal as soon as possible so that I wouldn’t make it hard on my family and girlfriend," he said. "My next goal was to finish my education and get back to work and maybe one day make the Paralympics."

Schrom, who is a Paralympic powerlifter and competes at international events, went back to work as a landscape contractor for his family’s business last spring. "Some tasks were much tougher and needed to be done slightly slower or differently, but I was working nonetheless," said Schrom, who leads the Nittany Valley Amputee Support Group.

Peter Calcagno lost his arm, just below the elbow, to a malignant tumor 62 years ago. Now 80, the Camp Hill resident said it’s surprising how much a person can adapt to doing things with just one arm — like tying a shoe or riding a bike — if the spirit is there to try.

Calcagno doesn’t wear a prosthetic arm because he didn’t find it to be very comfortable or functional. Although he says his lack of an arm cost him job offers initially, he became a successful engineer and eventually owned a business. He married and had two children.

"You have to be motivated to not let it get you down," he said.

Without downplaying the months of therapy it took to heal and the adjustments he’s had to make in his daily routine, Nickle stresses that he can do just about everything he did before he lost his leg.

"It could get the best of you if you let it, but I don’t have time to be bitter," he said. "There’s too much living left to do."

ABOUT THE TEAM: The Amputee Support Team of Central Pennsylvania is dedicated to education, peer support and resource sharing. It meets locally every other month and has chapters in Scranton, State College and Lancaster.

WHAT THEY DO: Peer visitors meet with new and fellow amputees to encourage them and help them make decisions on rehabilitation, physical therapy and prosthetics.

INFORMATION: Contact group president Dick Nickle at 258-6849. Or visit www.amputeesupportteam.com.
Posted by Bernabe at 10:48 AM