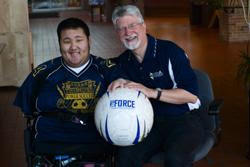 By Mary Jellison - Special to the Gazette
Published: Monday, January 18, 2010 12:57 PM CST
When the National Power Soccer Association announced the roster of its 2009 Team USA members, Pete Winslow's excitement meter blew a gasket. "I made the cut!" exclaimed the 15-year-old athlete.

His goal now? To defend the United States' hard-fought title, World Cup Team Champions, when the next international competition takes place in 2011. The last World Cup Power Soccer Championship was held in 2007 in Tokyo, Japan.

A lofty goal for one so young?

"Hardly," said Pete's dad, Herb Winslow, only a single word and quiet cadence needed to reveal a father's pride in his son. "Pete brings a lot of talent, drive and team spirit to whatever he does."

Drive has always been a part of the Winslow family, residents of Woodbury.

Before Herb and his wife Carolyn adopted Pete as an infant, "We visited Courage Center to research the options available to individuals and families dealing with disabilities. Until Pete came into our lives, we'd had no experience in this area. With its vast network of resources and knowledgeable professionals, Courage Center gave us the confidence to know we could navigate these new waters," Herb said.

Pete had been born without legs, a right arm that ends below the elbow, and a left arm that ends in a hand with three fingers. Today, he uses his powerful left arm, his impressive upper body strength, a wickedly maneuverable power wheelchair and personal drive, marshalling all of his attributes to test as many life experiences as he possibly can and to excel at the ones he chooses.

"Courage Center has been giving me options my entire life," Pete said with a smile. "I started at 5 or 6 in the swimming program, then later added weight training in the fitness program, and have participated in, let's see, basketball, Frisbee, baseball, football, track and field and now, because I've been driving a power chair since second grade, power soccer."

"And Pete plays the trombone in the top jazz band at Stillwater High School," his dad slipped in.

"It's sort of tough not to," jokes Pete. "I come from a musical family. My dad plays for the Minnesota Orchestra, and four of my five brothers and sisters all played instruments. I found I could play the trombone using a prosthetic arm, and it works fine."

Pete also credits his siblings for instilling his passion for sports. "They all play, so I do, too."

Pete only discovered power soccer three years ago, so he readily admits he still has a lot to learn.

"But learning is where the fun is, isn't it?" he said. "I'd tell anyone who is thinking about power soccer or any other sport, go slow. Come watch it first. Then, if you want, you can suit up in the gear and give it a try. Go slow, yes; but go! Give it a try."

Jazz band practice three times a week after school, personal practice at home, power soccer practices, week-long soccer camps at Camp Courage in the summer, and travel to soccer competitions around the country (he's been to Arizona, Indiana and Georgia) make Pete one busy guy. But he still takes time to keep up with friends.

"Pete's participation in sports, particularly power soccer, through Courage Center has enabled him to develop personal relationships here at home and all across the country," Herb said of his son. "These guys are on Facebook all the time, and, when they meet for an event, say, in Atlanta, they all know what's happening in each other's lives up to the minute. They care, and they're connected."

Added Pete: "Athletes with disabilities share a special bond. We understand each other and the challenges we deal with. We can say to each other - and to others, too - 'Just try.' Don't get me wrong: I have terrific friends at school, too. But there are some experiences you have to share to understand. That shared bond is pretty amazing."

The whole process - connecting with Courage Center, participating in its programs, discovering power soccer and making the Team USA roster - "has been amazing," said Herb.

"Carolyn and I have watched Pete grow and mature in many ways, from taking responsibility to schedule his time, to developing team and leadership skills. Something like this prepares Pete for more than international competition; it helps prepare him for life," he said.


Courage Center has been named a Paralympics Site for a number of sports. To learn more about Courage Center and its many programs and services, among them a vast array of Sports and Recreation programs, call 763-588-0811 or visit www.CourageCenter.org.
Posted by Bernabe at 10:19 AM