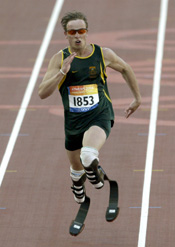 Ian Gregson was born to John and Barbara Gregson in St Helens, Lancashire, England on September 2nd, 1962. For his first fifteen years Ian lead a perfectly normal life for a working-class English school kid. Growing up in the seventies, he enjoyed music, football and the things that teenagers got up to back then. Ian excelled at running, he won his school cross-country championship and competed at the Lancashire Junior Track and Field championships in 1978.

However on May 17th, 1978 during his school lunch hour, Ian was involved in a terrible accident that resulted in the loss of his right leg above the knee. Undaunted by this physical setback Ian continued his involvement in track and field by taking up shot put and weight training. In September 1981 in an effort to escape Thatcher-ism Ian emigrated to Canada with his parents and brother.

On landing in Burnaby, British Columbia, the Gregson's found themselves in the middle of economic downturn. Unable to secure permanent employment, Ian gained national media attention in the fall of 1982 after completing the first ever Terry Fox Run in Port Coquitlam. Shortly thereafter, Ian began to focus on competing in disability sport events and in 1983 became Canada's top amputee athlete. In 1984 and 1988 Ian represented Canada at the Paralympics, in 1986 after receiving a 4th place at the World Championships in Sweden he became the first athlete with a disability in Canada to receive a post secondary athletic scholarship. In 1987 Ian received the Chevron Canada Award for Burnaby Post Secondary Sports. More

Whilst competing for Canada Ian returned to post-secondary education at VCC Langara and then later to receive his BA in Communications from Simon Fraser University. Ian was the first person in his family to recieve a degree.

After his years in academia, Ian moved on to work in the real world with Canada's largest communications company Rogers. After, three years and the realisation the Charles Dicken's method of management was alive and well in the 1990's, Ian formed his own company GB Communications. With this company Ian began freelance writing, web design and desktop publishing. It was in this period Ian wrote for numerous magazines ranging from regular columns in Canada's leading disability magazines to a controversial article on disability and sex in Larry Flynt's Hustler. As a result Ian gained a reputation as a writer who was not afraid to tackle uncomfortable issues. Ian's book Irresistible Force - A History of Disability Sport in Canada was published in 1998. The book took a serious look at the highs and lows of the Canadian disability sport movement over the last fifty years.

At this point Ian put his company on the back burner and he began work for one of Vancouver's more reputable ISP's, Axion Internet. In 2000 Ian returned to his Alma Mater at SFU to work for the Office of Research Services. In 2008 Ian left the confines of SFU to start a new career.

Ian's first introduction to politics came by a chance meeting with Svend Robinson on vacation in Mexico in 1988. Ian volunteered on Svend's campaign in 1992 and 1996, in fact Ian and his family were featured in Svend's advertising in the 96 election. However, in 1996 the provincial NDP cut back Pharmacare coverage [which pays for prosthetic legs] by 10%. Dismayed by this cutback to healthcare, Ian wrote to then Minister Responsible Joy MacPhail and in her terse reply Ian questioned his loyalty to the NDP overall. The NDP's performance from 96 onward solidified Ian's resolve in finding an alternate political voice.

Following the federal election of 2000 Ian attended the inaugural meeting of the Vancouver Hastings Green Party Constituency Association, at that first meeting he met the leader of the party Adriane Carr.

In 2001 Ian was selected as the Green Party of BC candidate for Vancouver Hastings and received 14.8% of the popular vote. Ian has since contributed his talents to various elections including municipal and federal and numerous by-elections. Ian was also a volunteer with the Citizens Initiative for Electoral Reform which included 4000 other volunteers who signed up 98,000 British Columbians in support of electoral reform. Ian recieved almost 9% of the vote in the 2005 BC election. In 2008 Ian ran for the WLP in the Vancouver Civic election and received over 10,000 votes.

Volunteer Work and Community Service
Practically since setting foot off the plane that brought him to Canada Ian has been volunteer for one good cause after another.
In 1982 Ian and another amputee formed the BC chapter of the Canadian Amputee Sports Association, an organisation Ian was a major part of until 1996.

Also in 1982 Ian joined the student radio station at Simon Fraser University, he served as DJ, Program Director, Station Manager and just about every other position until leaving to work at Rogers in 1990.

In 1992 Ian became the first person with a disability to chair the BC Sport and Fitness Council for the disabled [now BC Disability Sports]. This organisation is the umbrella group that organises the BC Disability Games in cooperation with a host community.

In 1996 Ian became a board member with the BC Coalition of People with disabilities, an advocate group for BC's disability population. In 1998 Ian joined the Gordie Howe disabled athletes Fund, it was here that Ian received his major inspiration for writing his book "Irresistible Force".

In 2001 Ian became a board member of the Simon Fraser University Alumni Association. In 2002 Ian volunteered his time at the monthly SFU Open Mic night which plays host to the young talented performers of Burnaby and Vancouver.

In 2003 Ian played a significant role in the NO vote for the 2010 Olympics. Ian was interviewed by local and national media as the only athlete that was voicing concerns over the 2010 Games. Today Ian is manager of the web site 2010watch.com the only real watchdog of the Vancouver Olympics.
Posted by Bernabe at 11:47 AM