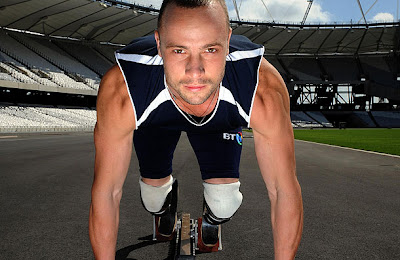 SEND him victorious, Oscar Pistorius, quicker than a London bus, the fastest man on no legs.

Pistorius, the double amputee 400 metres sensation nicknamed Blade Runner, stormed through the gateway to London 2012 by smashing his personal best in Italy on Tuesday.

After clocking 45.07secs in Lignano, Italy – shaving more than half a second off his previous record – Pistorius dipped inside the qualifying time for both next month’s world championships in South Korea and the Olympics.

Now the 24-year-old South African is in line to become the first sprinter to compete for both Olympic and Paralympic gold and Pistorius tweeted: “Can’t sleep I’m so happy. I have a dumb smile that’s permanent. Feels kind of surreal to have qualification time in the bag for next year’s Olympics.”

Until his record lap, Pistorius ranked only fourth among South Africa’s 400m contenders, but his time in Lignano would have been enough for fifth place in Beijing three years ago and fourth at the world championships in Berlin in 2009.

On his last visit to London, the Blade Runner dropped in on the 2012 stadium and settled into the blocks as an aspiring Olympian, now he has genuine hopes of an unprecedented Olympic and Paralympic double.

Three years ago he won a case against the International Amateur Athletics Federation, who tried to ban him from able-bodied competition, claiming his artificial limbs gave him an unfair advantage.

Pistorius produced scientific evidence showing he was running at a disadvantage because he had no calf muscles and a lesser supply of oxygenated blood.

Now his dream of becoming the fastest man over 400m is hurtling into view and he told Mirror Sport: “I can’t wait to come back and compete in London. My goal is to be the fastest man on the planet, and I would love to set a new world record at London 2012.

“The British people love their sport and I know they will generate a fantastic atmosphere for the athletes.

“If they ever found evidence I was gaining an unfair advantage, I would stop running. I would not want to compete at the top level if I knew the cards were stacked in my favour.

“But it would be something special for me to race in the Olympic 400m next year. That’s extremely important for me.”

Pistorius is blessed with a sense of humour which often distinguishes amputees from the able-bodied.

He said: “I’m not disabled – I just don’t have any legs. I had both limbs amputated below the knee as a baby because I was born without a fibula due to a congenital condition.

“My situation is never going to change, so the best way to handle my condition is with humour, and I learned to do that at an early stage.

“When I was at boarding school, my mates used to play jokes on me. I would wake up in the dormitory every morning and the first thing I had to do was to look for my legs!

“Those experiences soon teach you the value of humility, and I have tried to carry that attitude on to the track.

“I wish I had started racing in Paralympic competition sooner than I did because it taught me the importance of doing your best, not winning at all costs.”

Oscar Pistorius is a BT ambassador. He will be sharing his London 2012 experience through the BT Storytellers campaign at www.bt.com/storytellers
Posted by Bernabe at 9:51 AM