'Can't' not in amputee's vocabulary 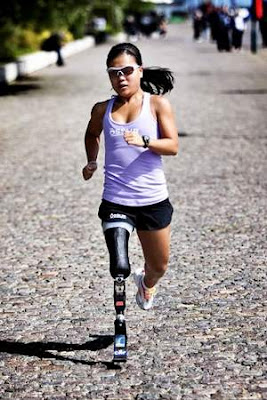 Palm Desert High grad Scout Bassett to compete in New York triathlon
For athlete Scout Bassett, an amputee almost since birth, getting to play sports has been as much a challenge as the sports themselves, with coaches and teammates telling her she could never be a serious competitor.

Rather than defeat her, those challenges made her stronger and more determined to prove her disability didn't define her.
“I was always welcome to practice with the team, but not compete and it was very difficult growing up,” Bassett said.
The 22-year-old Palm Desert High School graduate is among more than 3,000 athletes who will be competing in the Nautica New York City Triathlon on Aug. 7 in New York.
This is Bassett's fifth trip to the triathlon. She races in the severe leg impairment category.

Competitors swim just under a mile in Hudson Bay, bike 24.85 miles on the Henry Hudson Parkway and run 6.2 miles in Central Park.
In preparation for this year, Bassett has been working with a full-time personal trainer and triathlon coach.

“I'm really excited more than in past years because I really dedicated myself this year,” Bassett said.

Bassett was just under a year old when she lost her right leg in a fire. Shortly after, she was left on the doorstep of a government orphanage in Nanjing, China. She remained at the orphanage until she was 7.

“We are not certain of the circumstances surrounding the incident — where, when, how, why, etc. I arrived at the Nanjing Orphanage at the age of 1 with severe burns on both legs, but the fire only took my right leg from above the knee down,” she said.

Consistently passed over by couples preferring to adopt children with full physical abilities, she began to wonder if she would ever leave the orphanage.
Then in 1994, Joe and Susi Bassett, a young couple from Michigan, visited the orphanage to pick up a 16-month-old child they had adopted through Bethany Christian Services Adoption Agency.

Touring the orphanage, the then 6-year-old girl caught Susi Bassett's eyes.
The older children were seated around a table having a snack, the Bassetts recall in a short biography of Scout on YouTube. Susi Bassett looked to her right and “a little girl looked up at me and I said, ‘Oh, my god, she needs me. I've just got to have her,'” she recalled. 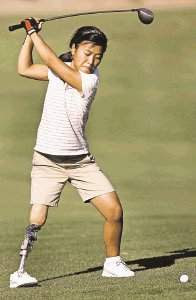 (Page 2 of 2)
At the same time, a young boy who sang to them as they walked into the room caught Joe Bassett's attention. Ten months later, after the paperwork was completed, they returned to China to bring both children home.

“I didn't know she was missing a leg because she was sitting at the table and I said, ‘That's just all the more reason she needs me,'” Susi Bassett said.
Fairy tale lifeLife since has been amazing, Scout Bassett said, though not without challenges brought on by what many saw as a disability.
She arrived in the U.S. and saw kids playing in youth soccer and softball and wanted to join them.

“I saw it as something that transcends language and other barriers,” she said.
But there were other barriers placed in front of her due to her missing leg.
“It wasn't until my experience with sports that I realized my disability would be a hindrance,” she said.

It was late in high school when that started to change. But along the way, she had started to question her abilities, she said.

“I was starting to believe what they were saying, that I never would be good enough to compete and that I belonged on the sidelines,” Bassett said.
“I credit my parents for teaching me not to feel self-pity and not treating me differently from their other two kids who are able-bodied,” she said.
Bassett also didn't want to give the coaches and players the satisfaction of feeling they had beaten her down. So rather than quitting, she found her determination and continued to prove herself.

Revisiting the pastAfter the Nautica triathlon, Bassett will compete in the ITU World Triathlon Championships, which will take her back to China for the first time since she was adopted, nearly 15 years ago.

“It will be an emotional trip for sure,” she said.
She said she plans to visit the orphanage where she hopes her story will help encourage and inspire other young girls there not to give up hope.
“As an orphan, I never thought I would leave or thought if I did I would be living on the streets.

“So living here and competing in triathlons is something I could never ever have dreamt about,” she said.
Her parents live in Palm Desert along with her brother and sister. They moved to the desert in 2006. Bassett attended Palm Desert High her senior year and was on the golf team.

She expects to graduate from UCLA after the fall quarter with a degree in anthropology.

“I really think that everything in my life happened because of incredible support of family, coaches, mentors and advisers.
“This has definitely been a team effort. All success in my life I share with all who have been a part of this journey,” she said.
Posted by Bernabe at 11:43 AM

Amazing and inspirational those who take their disabilities and step into it and take it to a higher level. Very brave.