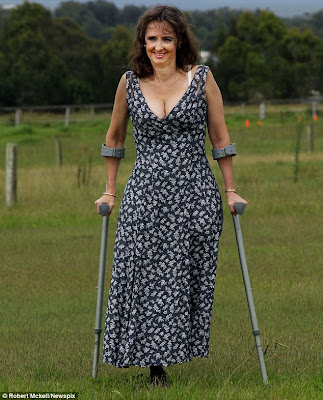 By Richard Shears and Julian Gavaghan

A woman who lost a leg when she fell under a London underground train is to receive a bionic limb in a remarkable world-first operation after successfully growing bone.
Marny Cringle 42, of New South Wales, Australia, lost her left leg in the accident in 1996 but because the remaining stump was too short she could not be fitted with a prosthetic one.
She faced the rest of her life on crutches or in a wheelchair -

Help: Marny Cringle, 42, poses on crutches - but in a few months time she will have a bionic limb after doctors were able to grow as before the stump had been too short
The painful procedure works by attaching tiny screws and periodically adjusting them to encourage the bone to stretch and grow by just a fraction of an inch at a time.

More...Twin brothers' devastation after both go blind within WEEKS due to rare genetic condition

Now surgeons want to fit a bionic limb to her femur, allowing muscle and bone to grow around it.
The artificial limb will become an extension of her body - the first time someone will have had a bone stump lengthened and a bionic limb fitted to it.

BRIGHTER FUTURE FOR THOUSANDS
Until now, many of those who had their legs amputated above the knee could not be fitted with a prosthetic limb because the remaining bone stump was too short.
But thanks to Marny Cringle - who grew her femur two inches through a painful process of having screws fitted and then gradually adjusting them to lengthen the bone - thousands more amputees could now one day walk again.
When she undergoes an operation in April at Macquarie University Hospital (pictured above) in Sydney, Australia, the 42-year-old will be the first person in the world to have a bionic limb fitted after growing bone.
Recent advancements in bionic limbs mean Miss Cringle - and many others like her - could live a relatively normal life with almost complete mobility.

Bone and muscle will grow around the artificial leg, which is powered by batteries and can detect small changes in movement and direction using motion and speed sensors.
Also, Using hydraulics, valves close and lock the knee in place when standing upright.

And, despite being fitted with hi-tech gadgets and lithium batteries, bionic legs, which cost around £50,000, can weigh as little as 2.9lb.
Orthopaedic surgeon Dr Munjed Al Muderis, who will head the operation to fit the artificial limb, told Sydney's Daily Telegraph that the procedure was 'the future for amputee patients worldwide.'

Thanks to modern surgery and her agreement to put up with painful procedure, Miss Cringle hopes to have the bionic leg attached to her leg stump as soon as April - and then surgeons and scientists will monitor it as tissue grows around the top of it.
'Just to be able to walk with two hands free is something I'm really looking forward to,' she told the paper at her home in Bolwarra, north of Sydney.
'And to be able to cuddle someone without having to have crutches hanging off me - it's those minor things.'

A former Australian wheelchair tennis champion, Miss Cringle added: 'I've beaten the odds with growing the bone as much as it has and so I know it is going to happen now. I've come too far for it not to.'

Miss Cringle was following her dream of overseas travel and working in London when she was hit by the train, her injuries so severe that she was not expected to live.
She had suffered severe head injuries, broken ribs and spinal discs and pierced lungs - in addition to losing her leg which was amputated above the knee when she was rushed to St Thomas' Hospital, London.

An accomplished violin player, she said that music had helped her with her recovery.
In an interview with the Catholic newspaper Aurora five years ago, Miss Cringle said that people had often doubted her capabilities 'but just because my circumstances have changed it doesn't mean I have changed.'

She believed the reason she was still alive was to allow her to continue achieving.
'There must be a good purpose to be here, something left for me to still do. I just haven't found it yet.'

Now she and surgeons hope that she and her new limb will give hope to many others who have suffered similar injuries.
The new generation of bionic limbs are an enormous improvement on old prosthetic ones.
The combination of motion and speed sensors and advanced computing mean they can detect small changes in movement and direction.
Also, Using hydraulics, valves close and lock the knee in place when standing upright.
And despite being fitted with hi-tech gadgets and lithium batteries bionic legs, which cost around £50,000, can weigh as little as 2.9lb.
Posted by Bernabe at 11:28 AM

Hey, very nice site. I came across this on Google, and I am stoked that I did. I will definitely be coming back here more often. Wish I could add to the conversation and bring a bit more to the table, but am just taking in as much info as I can at the moment. Thanks for sharing.
Aluminum Walking Crutches