Wounded Marines Start 'Amputee Outdoors' to Support Their Own

"We remind one another that life isn't over; life is just a little different now and nothing's impossible. You can still do it. You just have to find a new way." By Stephanie Gross Email the author October 15, 2012 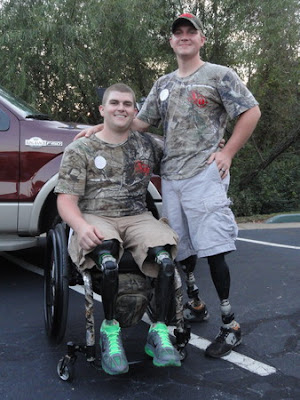 Marines Michael Boucher (R) and Tony Mullis (L) are two of the three founders of Amputee Outdoors. Credit Stephanie Gross Best friends and fellow Marines Michael Boucher, Tony Mullis and Zachary Stinson have always had a passion for the outdoors. And the fact that all three are double amputees isn't stopping them from hunting or fishing. It's what brought them together at Walter Reed National Military Medical Center and what led them to form an organization to help other wounded warriors live normal lives. Boucher, a Bogart resident, was injured in June 2011 while deployed in Afghanistan. During his recovery, he and the other co-founders of "Amputee Outdoors," had the opportunity to go on outdoor excursions and discover they still can live very fulfilled lives. 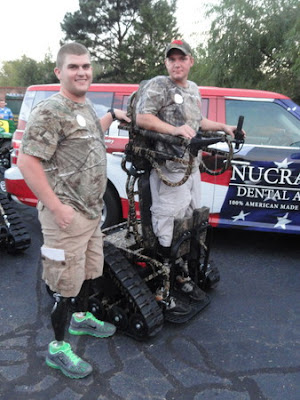 Marines Michael Boucher (L) and Tony Mullis (R) show off their new Tank Chair. Credit Stephanie Gross "We loved hunting and fishing prior to injury and we decided we didn't want to let our injuries stop us from being able to get out around the water to fish and hunt and just be active like before we were hurt," he said. So, the three Marines, ages 22-23, began brainstorming ways to give other wounded warriors the chance to explore the outdoors. "We remind one another that life isn't over; life is just a little different now and nothing's impossible. You can still do it. You just have to find a new way,"" he explained. Last week, a Tank Chair was donated to Amputee Outdoors, a gift made possible by the Semper Fi Fund. The chair, and others like it, will enable the organization to take wounded warriors out of the hospitals and into nature. Boucher, who has used a Tank Chair on multiple occasions described it as "amazing." "[Tank Chairs] cruise over rocks, upstairs, downstairs, through water, sand or mud," he said. "There's not really a whole lot that they can't go through." While Amputee Outdoors will give wounded warriors "a better and more normal life, knowing they have No Limits," Boucher says the organization will also serve to educate the public. "Just because we look a whole lot different and we have parts that aren't so real, we're no different," he said. "We still wake up every morning and have the desire to do the things we do just like a full able-bodied person." Amputee Outdoors is currently working on pitching a television series so that more people will learn about its mission. The organization is also in the process of acquiring status as a 501(c)(3) non-profit. Anyone interested in learning about ways to help is asked to use this contact form. You might also be interested in viewing: 20,000 Cheer While Marine Michael Boucher Honored at Braves Game Video: Wounded Marine Thanks Community for Support Video: A Hero Comes Home for the Holidays Don’t miss any Oconee news. Subscribe to Oconee Patch’s free newsletter, like us on Facebook and follow us on Twitter. Related Topics: Amputee Outdoors, Greatest Person, Marines, Michael Boucher, Tank Chair, Tony Mullis, Zachary Stinson, and semper fi fund
Posted by Bernabe at 10:43 AM

First before any business starts think about future planning that good plans for any business that it things help themselves to rapidly develop.