October 30 - Britain's double leg-amputee athlete Richard Whitehead, who took gold in the 200 metre T42 final at the London 2012 Paralympics, plans to run from John O'Groats to Land's End to raise money for cancer charities. The 36-year-old from Nottingham shot to prominence when he claimed a memorable victory in the 200m in the Olympic Stadium in a world record of 24.38sec, adding the Paralympic title to the world title he won last year. But despite his stellar late career as a sprinter, Whitehead is actually predominantly a marathon runner with a best time of 2 hours 42min 52sec over 26.2 miles. He is now aiming to become the first double leg amputee to run from John O'Groats to Land's End not only raise thousands of pounds for cancer charities in memory of his friend, Simon Mellows, who died in 2005 after contracting a secondary cancer, but also to inspire people to take up sport. "I'm a marathon runner by trade and the marathon, as an event, is accessible for anybody to watch," Whitehead told BBC Sport. "It's on an open road and you can just come down and be part of it, so I felt a challenge like John O'Groats to Land's End would engage people up and down the country about what sport's all about, and maybe be an opportunity for them to run a little bit with me. "It's great being on television and in the media but meeting people is something you can't put a value on and that's when you can have that inspiration and positive impact on people's lives." 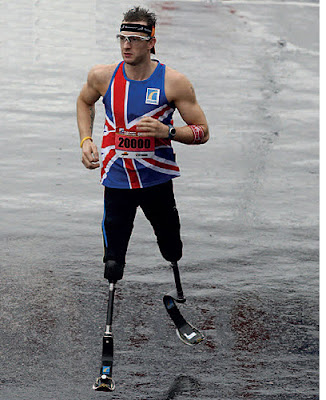 Richard Whitehead may be a Paralympic gold medal winning sprinter but considers himself to be predominantly a marathon runner The move comes after Whitehead's phenomenal transformation from a marathon runner to a sprinter, which came about after the International Paralympic Committee (IPC) said he could not race against arm amputees at the London 2012 Paralympics. After losing his appeal against the decision with the Court of Arbitration for Sport (CAS), Whitehead adapted his training to benefit his sprinting and gained 17 kilograms of muscle. But despite become the dominant force in the 200m T42, he admits he is still hopeful of competing in the marathon at the Rio Paralympics in 2016. "They [the IPC] are starting to put things into place," he said. "For me, it's been a long time coming. "They should look back at that ruling as a missed opportunity for them. "Sport, in some cases, is too political and they were trying to streamline athletics. "Sport is inclusive, not exclusive. "To run the marathon and 200m would be a one-off and reinforce my values that sport is not all about medals. "I'm obviously a strong athlete over 200m and I would like to retain my title in Rio. "The marathon, however, for me, is about opening up people's perceptions about what a person without any legs can actually do, and also overcoming obstacles and opening up opportunities for others. "It's not about being really successful in sport, it's about leaving that legacy." Contact the writer of this story at tom.degun@insidethegames.biz
Posted by Bernabe at 10:18 AM