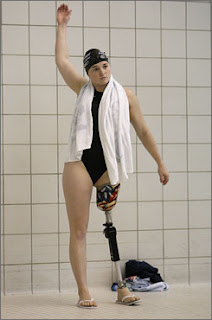 By Sal Ruibal, USA TODAY
COLLEGE PARK, Md. — As the swimmers begin to take their places at the start line, they nervously adjust their caps and tug at their swimsuits.
Melissa Stockwell walks across the wet tile floor to her lane, bends to stretch her back, then carefully removes her left leg.

Balancing on her right leg, she crouches as the starter raises the gun, then explodes into the water as the gun's sharp crack echoes across the wide expanse of University of Maryland Natatorium.

At the U.S. Paralympics Open Swimming Championships last weekend, normal was a relative term for the this international group of athletes whose physical conditions range from missing legs and arms to dwarfism to blindness.

On April 13, 2004, Army 1st Lt. Stockwell was leading a supply convoy through the city when her unprotected Humvee was blown into a guardrail by a roadside bomb.

Her left leg was torn away just below the knee, but infection soon ravaged her leg. Surgeons had to saw off the damaged tissue, leaving her with just six inches of limb.

After several months of recovery and rehabilitation, Stockwell walked away from the Army with a Purple Heart medal, medical retirement papers in her file and a prosthetic leg attached to the stump she affectionately calls, "Little Leg."

Since then, the former competitive gymnast, diver and rower has rediscovered her athleticism.

Just four months after she was wounded, she powered a handbike to a finish at the New York City Marathon.

An ROTC graduate of the University of Colorado, she also returned to the Rocky Mountains to relearn how to ski.

She and husband Dick, who was also an Army officer and was in Baghdad when she was wounded, moved to Chicago, where she began swimming in Lake Michigan as training for triathlons.

"I was drawn to swimming because I didn't have to wear a prosthetic to do it," she says.

Now she's one of 17 wounded Iraq veterans aiming for a spot in the 2008 Beijing Paralympics with the support of a U.S. Olympic Committee program that strives to turn warriors into competitive athletes. She's the only swimmer in the group and one of two women (Kerry Miller competes in volleyball).

The program — funded by the USOC, Visa and McDonald's — is not just about elite athletes with Paralympics potential. More than 400 veterans are involved at levels more recreational than Olympian.

"Making the Paralympics team is a great goal," says John Register, associate director of outreach development for the U.S. Paralympics Team, "but the benefits of playing sports go far beyond competition."

U.S. Paralympics Swimming Team director Julie O'Neill says Stockwell has been making "remarkable progress" but has not yet secured a spot on the squad for Beijing.

Stockwell will need to post global competitive times at the U.S. Paralympics Swimming Team Trials in April to accomplish that goal.

She's focused on making the team, but she also sees the rewards she's already reaped.

"I'd love to have my leg back," says Stockwell, who also learned how to fit other amputees with prosthetics. "But the things I have been able to do have been valuable to me. I live a great life, I have no regrets and don't want to go back to what was before.

"This happened for a reason, and it really doesn't matter if I have a leg or not — I can still do whatever I want to do."
Posted by Bernabe at 2:33 PM