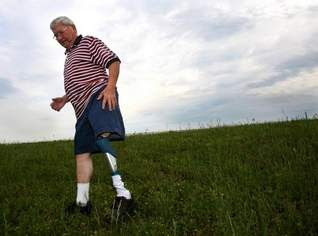 
Since Paul Dale's artificial leg started failing,he has suffered falls, injuring an elbow, pulling both shoulders and breaking a rib.

But Dale's insurance company won't pay to replace the prosthesis.


"I think I deserve the same standard of life as anyone else," said the Columbia man, who lost the majority of his left leg to bone cancer in 1983.

She said insurance companies often deny people access to an artificial limb by allowing only one prosthesis per lifetime, labeling the more expensive computerized limbs as experimental or capping the benefit at $1,000 or $5,000 when the average cost is $8,000 to $15,000.

The Knoxville-based Amputee Coalition of America is pushing for federal legislation, dubbed the Prosthetic Parity Act of 2008, which would force insurance companies to cover prostheses just as they would cover other critical medical care.

Mary Thompson, spokeswoman for BlueCross BlueShield of Tennessee, said the company doesn't have coverage limits on prosthetic devices and opposes a mandate.

"While the intention of state and federal health-care mandates is usually good, they have significantly increased the cost of health care in Tennessee and the nation, almost always for the privately insured," Thompson said.

Sheets said that when artificial limbs are fully funded it adds only about 25 cents per month to insurance premiums.

"People get insurance to cover catastrophic events. What is more catastrophic than losing a limb?" Sheets said. "I think the general public just assumes that if they lose a limb they'll get a prosthesis, and right now that's not happening."

"Right now, it's hung up in subcommittee. I don't suspect we'll be able to get it done this year," said Mike Alder, a lobbyist for the Tennessee Orthotics Prosthetics Facilities Inc. "There will be a renewed effort next year."

Alder said the insurance industry is resisting the legislation to control costs, but he argues that providing artificial limbs will be more cost effective in the long run.

"To confine someone to a wheelchair after losing a limb is a sedentary lifestyle," Alder said. "Your health is not going to get better by sitting. People can return to very active lives with prosthetic devices."

Sheets said it isn't known how many people are denied artificial limbs each year.

According to the coalition, there are roughly 1.9 million people with limb loss in the U.S.

Sheets said being denied an artificial limb could have devastating results: People sometimes end up losing their jobs and become confined to wheelchairs.

Amputee needs new leg
Dale said these days a rock or a slope could throw him off balance and send him toppling over. He uses a C-Leg, a high-tech prosthesis that uses batteries and a computer chip to better replicate the movements of a real leg. The computer in the leg is malfunctioning and the battery won't stay charged.

"I need a new leg to have a decent way of life," he said.

Dale said his insurance company, BlueCross BlueShield of Georgia, wouldn't pay for a new leg because it's considered experimental.

However, BlueCross BlueShield of West Virginia paid for the exact same prosthesis for Dale eight years ago.

Cynthia Sanders, spokeswoman for BlueCross BlueShield of Georgia, said she couldn't comment on Dale's situation specifically because of privacy issues, but she did say that scientific studies on the advantages of computerized prosthetic devices are limited.

"We will continue to review peer-reviewed medical literature and make changes as evidence warrants," Sanders said.

Sheets said the real issue is insurance companies don't want to pay. A new C-Leg for Dale would cost roughly$45,000.

"That's a ploy being used by insurance companies for the more expensive items," Sheets said. "Medicare has been paying for C-Legs for 10 years. Medicare doesn't cover anything that's experimental."

Dale, 64, said he needs the high-tech leg because he's active. He works 40 hours a week, cuts his own grass and restores old cars in his spare time.

Dale said he has looked into getting his artificial leg fixed, but factory officials said the damage is too costly to repair."I'm not asking for an upgrade," Dale said. "I just want a replacement for what I've got."