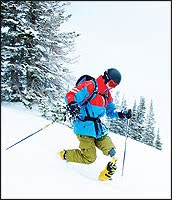 When Jarem Frye pushes off the chair lift and glides down a black-diamond slope, you can tell he's good. His knees bend rhythmically under a powerful set of quads in the unmistakable two-step of an expert telemark skier. He's measured and smooth, carving sprayless white tracks, bombing toward a ski jump below. He launches off it, cuts the air with a high backflip, lands in an explosion of powder, and disappears downhill. When you catch him at the bottom of the slope, he's taking a break. He pulls up the left cuff of his ski pants and twists off his left leg, dropping his boot, titanium calf, and self-invented left knee on the hardpack with a thunk. He looks up and grins.

Sixteen years ago, Frye was an 85-pound 14-year-old in a Utah Shriners Hospital, looking down at his natural left leg for the last time. He had osteosarcoma and had decided after spending more than a year in and out of hospitals that his best chance for an active life was amputation. His doctors told him that with a transfemoral amputation, he wouldn't be able to run, bike, ski, or rock climb. Snowboardinghis dreamwas out of the question. The hospital's poster-child for amputee athletic achievement was a boy who had walked just half a mile with his prosthetic leg. Frye would be given a four-bar knee and a SACH foot and supposedly go home to a life of similar achievements. He never swallowed that. He told The O&P EDGE , "The amputation didn't really change my plans for my life, and at the time, all I wanted to do was race mountain bikes." Immediately after the amputation, his parents bought him a new mountain bike, and using a clipless pedal, he rode more than 600 miles on it before receiving his prosthesis.

Frye says, "I understood that the doctors were telling me the current standards for what an above-knee amputee could do, but I also had the resourcefulness to find ways to do what everybody said I couldn't do. I had my own ideas about what I could do, or what I would be able to substitute doing." He soon discovered that with his simple prostheses, he could not only mountain bike, but runalbeit with a muscle-wrenching gait. Rock climbing was too dangerous to be worth it. Snowboarding was impossible, but thanks to the National Abilities Center, Park City, Utah, he learned to downhill ski and joined its three-track racing team. Frye showed his prosthetist what he could do and begged him to lobby Shriners for an energy-storing foot. 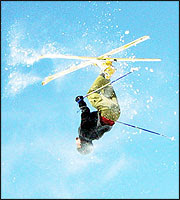 Photograph courtesy of Colin Botts.
Frye says, "At the time, it was ridiculous, like a 14-year-old asking for Paralympic-quality equipment. Meanwhile, I kept breaking everything that they had already bought me, so I was costing them a lot of money." Within three months, they sent the foot.

After high school, Frye started working at a ski resort. To his friends' scoffing, he decided to try telemarking. He realized that it was simply impossible to achieve its bent-knee stance without active lower-leg support .

Frye says, "To me, the only time that I was disabled was when I was unable to do something. When people said that I couldn't telemark, it became a quest to prove I could. I started analyzing my equipment to find out why it wasn't possible and to figure out how I could tweak things or completely reinvent them specifically for telemarking." He continues, "My Christmas presents from the time I was ten years old were things like grinders and forgesbuilding things was what I was most interested inso I didn't begin to think I couldn't build something." 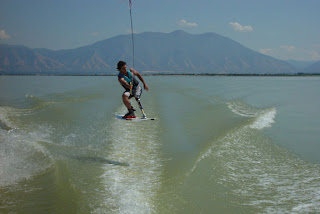 With a year of continuous work, he created a Frankenstein's monster of an energy-storing knee, cobbling on parts, grinding it, and tuning it. Using the knee, Frye became the world's first person with a transtibial amputation to telemark. Deciding to reinvent the knee from scratch, he rigged another prosthesis frame with a shock-absorbing system made from cast-iron pipe and a car's valve spring. It worked better than the first one. He wore a second prototype of it through three ski seasons, doing his best to break it, and failing. His prosthetist, Lane Ferrin, CP, Northwest Orthotics and Prosthetics, Provo, Utah, said that before that time, Frye came in every six months to have his heavy-duty conventional prosthetic knee replaced or rebuilt.


At the resort, coworkers urged Frye to start a company to manufacture the knee. He pondered the number of amputees who would be interested in telemarking and dismissed the idea. However, he soon tried the knee in other sports, starting with rock climbing, and succeeded. "The next winter," he recalls, "I took it snowboarding, and that's when I realized there would be a market for it because I knew a lot of amputees who wanted to snowboard."

To begin, Frye spent the next six years learning machining, manufacturing, and engineering through a variety of jobs. He worked anywhere he could learn an essential new skill, and when he was done, he moved on. The energy-storing knee prototypes he produced were waterproof and practically indestructible. Using one, he became the first person with a transfemoral amputation to wakeboard and to competitively rock climb. At the 2006 Extremity Games, he took the overall rock-climbing championship.

One afternoon in the midst of his self-education, Frye was getting a haircut from a female friend when a beautiful red-haired woman dropped by to visit his barber. He remembers, "I started hitting on her, and she totally gave me the cold shoulder because she thought I was dating her friend and that I was a slimeball for flirting with her right in front of her friend." After straightening out the mix-up, they went out. Frye recalls with a laugh, "On our first date, we agreed that people in Utah get serious too fast and that you shouldn't get engaged without dating for a least a year. Five months later, we were married." 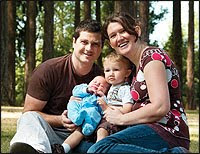 From left: Jarem, Jude, Ari, and Sara Frye. Photograph courtesy of Logan Ellis.
After he and Sara married, they moved to Oregon to work together for a commercial painting company. Within a month, they were laid off. Both deeply spiritual, they prayed for direction, and decided to start a business manufacturing Frye's knees. That business became Symbiotechs USA, Amity, manufacturer of the XT9 ESPK (energy-storing prosthetic knee). Around that time, they found out that they had started something elseSara was pregnant. Their son, Ari, was born in 2007, and just eight months later, another son was on the way. Their second son, Jude, is now five months old.

As their boys have grown, so have sales at Symbiotechs, though its ability to manufacture the knee is just beginning to meet the demand for it. Frye has turned the Symbiotechs website into a Generation-X marketing powerhouse that includes a social network for XT9 users, who share information about how to use the knee in various sports, including surfing, skateboarding, scuba, ice climbing, and motorcycle riding. It also features clips from the upcoming Symbiotechs-sponsored Xamped Film Festival, whose short films showcase unique athletes, "from blind climbers to double-amputee pro snowboarders, to paraplegics who do backflips in wheel chairs."

Sara says that Frye would like to grow the company to the point that it could help sponsor individual athletes and the Extremity Games. He'd also like to expand Symbiotechs' offerings for the customers whom he cares so much about. Frye's future looks as good as his telemarking formmeasured, determined, and with the grace that comes from healthy audacity.
Posted by Bernabe at 10:05 AM