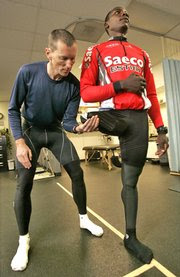 
STAFF WRITER
2:00 a.m. May 25, 2009
Dedan Ireri of Kenya completed a training ride with his host, Chris Maund, in Encinitas. Ireri hopes to compete in the 2012 Paralympic Games in London. (Howard Lipin / Union-Tribune) -
A new leg for Dedan
Dedan Ireri lost his right leg in an accident when he was a child. Despite his disability, the Kenyan is a competitive cyclist who rides a bicycle with just one leg. Encinitas residents Chris Maund and Janet Alexander brought him to San Diego County for three months in 2009 to obtain a prosthetic leg. Video by Tanya Mannes.
by Union-Tribune

More Videos Chris Maund helped Dedan Ireri with exercises to prepare him to use a new carbon-fiber and titanium leg. (Howard Lipin / Union-Tribune)
ENCINITAS — After losing his right leg in a childhood accident, Dedan Ireri thought he would never walk again.
Yet he was determined to keep moving. He learned to ride a beat-up bicycle with his one good leg, pumping the pedal and propelling himself past able-bodied riders on the dust-covered roads of his native Kenya.
“Riding bike makes me feel strong,” said Ireri, 28.
But off the bike, his crutches were a constant reminder of his disability, and his poverty.
That was until he met an Encinitas couple traveling in Africa. They struck up a friendship over their love of cycling, and vowed to help Ireri walk again.
Janet Alexander and Chris Maund are hosting Ireri on a three-month visit to San Diego County and have helped him obtain his first prosthetic leg.
Today, Ireri will return to his family in Nairobi, able to walk unassisted for the first time in 16 years.
“I am feeling very happy,” he said in a recent interview, speaking carefully because Swahili is his first language. “I am happy to be here.”
Alexander and Maund train athletes – including cyclists – at the C.H.E.K. Studio in Encinitas. They are using their expertise in musculoskeletal rehabilitation to help Ireri learn to use his new carbon-fiber and titanium leg, which has a hydraulic knee and a springy, energy-saving foot.
They also have bought him a new Roubaix Pro bicycle. Eventually, Ireri will be fitted with a special socket for attaching his stump to the prosthesis that will allow him to ride the bike with both legs. That probably will happen next year because he needs to adapt to the walking socket.
Maund and Alexander said they were inspired to help Ireri because they recognized his athletic prowess and felt he deserved a chance to excel. They count him as an equal among the elite athletes they have trained, such as Ironman world champion Heather Fuhr.
“If he had two legs he'd probably be good enough to be one of the top amateur athletes in the country,” Maund said. “I like encouraging people I know have potential.”
The couple said they were amazed by Ireri when they met him in 2007 during the Tour D'Afrique, a 7,400-mile group bike ride from Cairo, Egypt, to Cape Town, South Africa. In each country, local riders temporarily joined the tour.
“This guy appears in the group and he only has one leg,” Maund said. “And then we start dialing the pace up racing and he's still there. He's very, very strong with one leg.”
Ireri was obviously not a beginner.
“He had all the gear,” Maund said. “He's got the jersey, the shorts, the helmet, the gloves.”
The couple stayed in touch with Ireri and helped him obtain a visa to visit the United States. They also raised nearly $30,000 – half of it their own money – to pay for his trip to California, the prosthetic leg and the bike.
Ireri's days in San Diego County have included rides to Torrey Pines and Escondido, appointments with specialists, weight training and practice walking. He also is learning English, which will help his job prospects when he returns to Kenya.
Kel Bergmann, who fitted Ireri for his leg, said, “He learned to walk on that prosthesis as fast as anybody I've seen.” 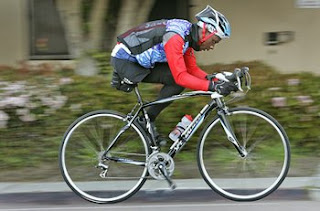 Bergmann is the president of SCOPe Orthotics & Prosthetics Inc., the San Diego company that manufactured Ireri's leg. The first day that Ireri was to take home the prosthesis, “he basically handed Chris his crutches and refused to use them as he walked to the car,” Bergmann said.
Ireri grew up in the slums of Nairobi and for years lived on the street. As a child he supported himself through petty theft.
At age 12, he was hit by a bus and his leg was amputated at the upper thigh. After the accident, he survived by begging.
As a teenager, he met Ingrid Munro, a Swedish woman who heads JamiiBora, a charitable trust in Kenya that provides microfinance loans. Munro spent years trying to help Ireri start a small business or get a job.
Munro said Ireri was “a very charming boy with a big smile,” but it took time before he was ready to leave the street.
“The problem with beggars that have a big handicap is that they see that handicap as a fundraising asset,” Munro said in a telephone interview from Kenya. “In the very beginning we tried to help get some schooling but he snuck off all the time.”
Eventually, Ireri met Susan Wangui, who became his wife. The couple have three children: 2-year-old Benson, 5-year-old Peter and 9-year-old Lucy.
He joined a riding club, which helped him to increase his physical endurance with one leg. About four years ago, Ireri asked Munro if she would hire him as a bicycle messenger for JamiiBora.
His salary as a courier is now the main source of income for his family.
Munro said Ireri found a niche in the cycling community. In 2007, he competed in an international cycling competition in Colombia for people with physical disabilities. In the 15-kilometer race he placed 14th with an average speed of 35.9 kilometers per hour (22.3 mph). That time qualified him for the 2008 Paralympic Games in China, although his plans to go fell through.
“He has learned that there is nothing that is impossible,” Munro said.
These days, Ireri can't seem to stop smiling. And his eyes shine as he looks at his bicycle, with which he hopes to compete in the 2012 Paralympic Games in London.
“Good size, good weight,” he said. “I like it because in Africa many bike is steel. Now my bike is good bike, carbon fiber.”
Maund is optimistic about Ireri's future. “Once he learns to use the prosthetic leg properly, I really think it's possible he can win medals at Paralympics 2012,” Maund said.
Alexander and Maund are already planning to host him next year to continue his training.
Ireri said, “I looking for gold medal.”
“It is my dream,” he said. “One day I win a medal.”