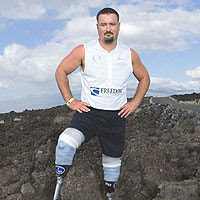 After losing his legs in an accident, Scott Rigsby forged new ground as a triathlete.

PUBLISHED 11/30/2007
At mile 23 on the marathon portion of Hawaii's Ford Ironman World Championships in October, Scott Rigsby was in so much pain that he fantasized about falling onto a stretcher. He'd completed the 2.4-mile swim, the 112-mile bike, and most of the 26.2-mile run. The double amputee's residual limbs were blistered, swollen, and chafed raw, making each step feel like his skin was pressing into the hot coals of the surrounding lava fields. But when he saw 16:13 on his watch, he realized he had no time to waste feeling sorry for himself if he wanted to finish before the 17-hour cutoff. So he picked up the pace.

"That was the most pain I've inflicted on myself," says Rigsby, 39, who lives in Atlanta. "I started saying, 'This is what you've worked so hard for. If you can do this, you can change the world.'"

Indeed, Rigsby was after more than just bragging rights. He was out to defy expectations and redefine the potential of disabled athletes by becoming the first double amputee in the world to complete an Ironman.

Rigsby was an 18-year-old high school football player in July 1986, when an accident changed the course of his life. Riding in the back of a trailer that was clipped from behind by an 18-wheeler, Rigsby was dragged 328 feet, and eventually pinned under the trailer he was riding in. His right leg was immediately amputated--the first of 17 surgeries he would endure over the next year. Doctors said it would be 18 months before he could walk again, never mind run. "I went through a denial stage, thinking it was going to grow back," Rigsby said. "It was a difficult time."

Five years later, Rigsby began classes at the University of Georgia, where he started swimming and biking. But he wanted to run. "If you tell me I can't do something," he says, "I'm going to find a way to do it." One day he hit the track, but on his fourth lap, his left foot, which had been reconstructed, couldn't withstand the force, and the seam between his skin graphs tore. The setback hit Rigsby hard. "I felt like a prisoner to my 'good' leg," he says.

In the ensuing seven years, Rigsby finished college, worked a variety of jobs in sales and construction, and sank into a depression, for which he was eventually treated. Finally, in 1998, he decided to have his left leg amputated below the knee. "With my new prosthesis, I could resign from being a professional patient," he says. "I finally had two good legs."

Inspiration came in December 2004, when Rigsby read a Runner's World story about Sarah Reinertsen, the first female above-the-knee amputee to attempt the Hawaii Ironman. "I had never even done a triathlon, but when I realized that no double amputee had done an Ironman," says Rigsby, "I decided I'd go for it."

Barriers fell one by one. In 2006, Rigsby became the first double amputee to finish an Olympic-distance triathlon and a half-Ironman. In March 2007, he became the first to finish 26.2 miles at the ING Georgia Marathon, in a time of 5:04. Three months later, Rigsby went for his ultimate goal at the Ford Ironman Coeur D'Alene triathlon in Idaho. He crashed on the bike, however, and neck and back pain forced him to call it a day halfway through the marathon.

Rigsby's next chance would be in Hawaii. On October 13, temperatures in Kona were in the mid 80s and the humidity was oppressive. Friends at the finish were getting antsy, unsure whether Rigsby would make it before time ran out. At last they saw him come down Alii Drive and cross the line. His final time on the clock: 16 hours, 42 minutes, and 46 seconds.

"Some people who go through an amputation end up being so inactive that they're at risk for obesity, depression, and diabetes," says Rigsby's training partner, Mike Lenhart, who runs the Getting2Tri Foundation. "Scott provides courage and inspiration to people and shows them their potential."

Realizing the impact he can have on others, in January 2007, Rigsby founded his own nonprofit organization to provide physically challenged athletes with coaching and mentoring support. "Once you accomplish something, it's easy to ride the wave of success and have your 15 minutes of fame," Rigsby says. "I want to stay the course and show people that you can take the life that God gave you and use it to do something extraordinary."

"Maybe other people--both able-bodied and amputees--can look at me and say, 'you know what? Life is tough, but if this guy can make it, then I can make it.'
Posted by Bernabe at 11:12 AM