Amputee boy who is a little Billy Elliot 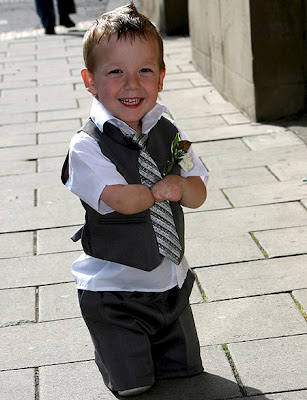 Four-year-old boy takes up ballet after losing limbs through meningitis
Harvey Phillips, who lost both his legs and one arm after suffering from meningitis, has defied the odds to take up ballet lessons.

The ballet classes have improved Harvey's posture and are also helping him walk on his new prosthetic limbs Photo: MASONS
Harvey, from Louth, Lincolnshire, had his lower legs, right arm and fingers on his left hand amputated in 2005 when he was just nine months-old.

His mother Lisa Phillips, 34, feared he would never be able to run around with friends or enjoy music and dance.


But Harvey proved her wrong after watching his older sister Kayla, five, at her local ballet class.

He was so determined to take part that he took to the dance floor without the aid of traditional prosthetic limbs.

Now he is able to run, jump and twirl using custom-made plastic caps to protect his legs.

The ballet classes have improved his posture and are also helping him walk on his new prosthetic limbs. 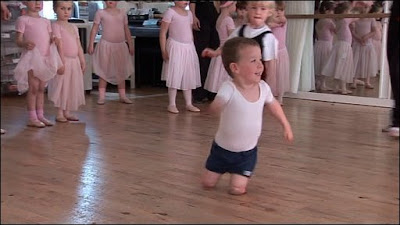 "He wants to try everything. He doesn't understand the meaning of the word 'no'," she said.

"He's in his element when he's being active and dancing. He's totally comfortable in his own body.

"And if he can't do things the way his friends do it, he'll find his own way of doing things. 'I'll do it my way,' he tells me.

"I'm so proud of him. I always knew he'd have to fight hard all his life but I'm happy in the knowledge that he's ready for that fight."

When he was three years-old doctors made a permanent incision across the palm of his left hand so he could hold his crayons, pens, toys and his spoon.

He was later enrolled in a mainstream school, where he has excelled – especially with his handwriting.

Harvey became so independent that he began going to weekly ballet classes last November, where he takes part with other able-bodied children his age.

He now dances on 'stump caps' rather than his full-sized prosthetic legs, which he says gets in the way. 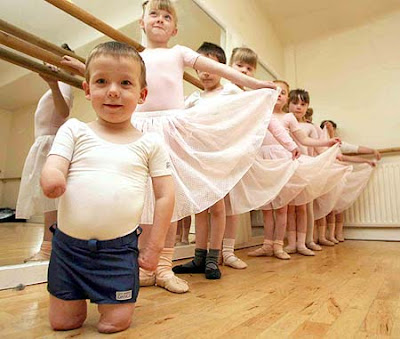 "We were all a little bit apprehensive when he first started and we've been very careful about how we were describing things," she said.

"We knew it would be a challenge but I think we've found ways to overcome these things by exaggerating the use of the head.

"I think he's coping nicely. He smiles continuously so he must be OK with everything."

Harvey will always need a one-to-one helper at school, but Lisa said he is becoming more independent every day.

"The name Harvey means battleworthy, and that's exactly what his is," she added.
Posted by Bernabe at 1:15 PM

I'm so glad he found a way to shine, what a wonderful young man. He's an inspiration to all children amputees.