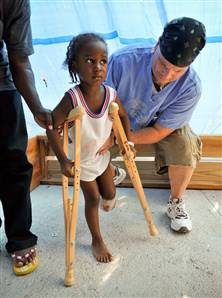 Jon Warren
Doctors at Good Samaritan Hospital in Jimani, Dominican Republic, had to amputate 4-year-old Schneily Similien’s lower leg because of injuries suffered in the Haiti earthquake. His father, Ducarmel Similien, says he will do whatever it takes to get a prosthetic leg for his boy.

Haiti struggles to recover
The island is devastated by a deadly earthquake and dozens of aftershocks.
more photos

List of charities, organizations
Click here for a list of links to relief organizations and discuss ways you can help those in need in Haiti.
By JoNel Aleccia
Health writer
msnbc.com
updated 5:30 a.m. PT, Thurs., Jan. 28, 2010 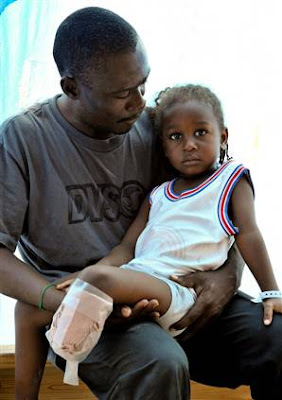 By the time 4-year-old Schneily Similien’s parents got him to a doctor, it was too late to save his left leg.

The Haitian boy was hurt in the Jan. 12 magnitude-7 earthquake that killed at least 200,000 people and injured at least that many more. As the ground shook his family’s Port-au-Prince home, pieces of concrete ceiling came down on Schneily and his mother, Darline Similien, a 37-year-old kindergarten teacher. One large chunk crushed the child’s leg.

But after five days of searching in vain for medical care, the family had to travel to Good Samaritan Hospital in Jimani, about 45 miles away in the Dominican Republic. There, doctors had to choose between preserving the boy’s limb — or saving his life.

“I would rather have my son with one leg than to not have my son at all,” Schneily’s father, Ducarmel Similien, a 40-year-old carpenter, said through an interpreter for World Vision, a Christian humanitarian organization who relayed the story to msnbc.com. World Vision workers have been providing basic supplies to quake victims and volunteering in medical clinics at the Haitian border.


Schneily is among growing numbers of earthquake amputees created by the disaster. Estimates of amputations have varied dramatically — from a few thousand to more than 110,000, according to agency reports. There's no reliable count amid the chaos so far, but even the most conservative disaster workers say more than 75 people a day have lost limbs since the quake, either because of initial injuries or because of secondary infections and gangrene.

“This is already an unusually high number of amputations even for this kind of an earthquake,” said Wendy Batson, executive director of Handicap International, an aid group with global experience helping amputees and other disabled people. Her organization expects to see as many as 4,000 amputees when final counts are done.

In past quakes of similar magnitude, amputees have numbered in the hundreds, not in the thousands, Batson said. But the carnage in Port-au-Prince has been worse, partly because the quake was centered near the city of 2 million, partly because of erratic building construction standards, and partly because so many health and aid agencies were destroyed by the tremors.

“We’ve seen many amputees, but nowhere near the magnitude of this,” said Ivan R. Sabel, chairman of Hanger Prosthetics and Orthotics, the largest supplier in the U.S. “These folks are going to need ongoing care.”

Last weekend, more than 300 cars loaded with wheelchairs, walkers, crutches and artificial limbs lined up in a parking lot at Old Dominion University in Norfolk, Va., where organizers for the agency Physicians for Peace collected the mobility devices to be refurbished and sent to Haiti, said Ron Sconyers, the group’s president and chief executive.

“A gentleman came by and had tears in his eyes,” recalled Sconyers. “He said, ‘My wife died last month; this is her wheelchair. I know it will help someone have a better life.’”


On the ground in Port-au-Prince, Healing Hands for Haiti, a non-governmental organization with a decade of experience in the country, may be forced to rapidly double or triple its capacity to provide help for a disabled population that numbered 800,000 even before the quake.

“We’re going as fast as our feet can carry us,” said Eric Doubt, the agency’s executive director.

Helping Haiti amputees
Some groups aiding quake victims:
Handicap International: Co-recipient of the Nobel Peace Prize in 1997 for work with land mine victims, the agency conducts 250 programs in 60 countries. The group has been working in Haiti since 2008.
Amputee Coalition of America: Provides resources and education for amputees in the U.S. and around the world.
Healing Hands for Haiti: Aid agency has worked for more than a decade providing help for 800,000 disabled Haitians.
Physicians for Peace: Provides medical education and training in developing countries, including Haiti.
Prosthetic Center of Excellence in Las Vegas, Nevada is accepting used braces, bracing, orthotics, as well as prosthetics and will ship to a clearing house in Haiti.
American Orthotic and Prosthetic Association: National trade association of manufacturers and suppliers of braces and artificial limbs.
Prosthetics Outreach Foundation: Helps amputees in the developing world gain mobility.
Legs for All: LeTourneau University program that helps clinics in developing countries produce inexpensive, durable prosthetics locally.
Limbs for Life Foundation: Helping re-establish prosthetic supply and distribution for Haiti in the Dominican Republic.

Healing first, then prosthetics
It’s still too early for earthquake victims to receive artificial limbs, said Pat Chelf, a board member for the Amputee Coalition of America, an education and advocacy group. Under the best circumstances, amputation injuries take a month or more to heal, and the conditions in Haiti are anything but the best.

Some patients had limbs sheared by the force of collapsed buildings or falling debris. Others had to sacrifice arms and legs when rescuers couldn’t free them any other way. Others lost fractured limbs because infection set in before they could be properly repaired.

In some cases, emergency operations were performed with chainsaws, with none of the usual thought about preserving nerves, flesh and function.

“There’s no way that these people had their surgical intervention optimized,” Chelf said.

From initial fittings and supply of prosthetics to ongoing adjustments, repairs and replacements, the demand for artificial limbs will be intense, expensive — and long-lasting, said Chelf.

Each device could cost between $4,000 and $6,000 per amputee, Chelf estimated. In the U.S., a new amputee can expect a minimum of four fittings a year to make sure the device is comfortable and works properly. In addition, several physical therapy sessions are necessary to help patients learn to adjust the way they walk and other body movements to use the new limbs.

“You have to be taught to use the device,” Chelf said. “You don’t just put it on and go.”

Some groups plan to make it easier and cheaper for amputees in Haiti and other developing countries to get limbs by setting up small shops where prosthetics can be made locally instead of being sent from abroad.

“For us, the issue is, when we walk away from this, it’s a long-lasting effect,” said Roger Gonzalez, executive director of Legs for All, a prosthetics development project at LeTourneau University in Longview, Texas.

An engineering professor, Gonzalez has created a durable, easy-to-make artificial leg that is fashioned of hard plastic and can be repaired with nuts and bolts from a hardware store. It costs about $15 to make, compared to about $2,000 for the cheapest leg in the U.S., and it can withstand the rugged geography and the dirt, heat and humidity of a place like Haiti.

“You have to have a knee that’s pretty robust,” says Gonzalez, who already operates programs in Sierra Leone, Bangladesh and Senegal.

Disabled can become pariahs
Making prosthetics cheap, repairable and widely available will be the only way to prevent Haitian amputees from becoming additional casualties of the killer quake. In a country where life is harsh at best, the disabled are often regarded as economic burdens and social pariahs, said Eric Doubt of Healing Hands for Haiti.

“The disabled and handicapped are pretty much neglected and abandoned,” he said.

That’s a view echoed by Schneily Similien’s father, who is just starting to contemplate his son’s future.

“There is a stigma with losing a limb; people tend not to take into account the needs of disabled people and it changes your life,” Ducarmel Similien told World Vision. “They don’t consider you a whole person.”


Acquiring replacement limbs may well be a matter of survival for children like Schneily as well as adults who lost arms or legs in the earthquake’s aftermath. Doctors in Jimani have told Schneily’s parents it could take up to three months to acquire a prosthetic leg for the boy. The parents say they’ll do whatever it takes to get one.

“I don’t want to think about the difficulties he might face right now,” the child’s father said. “He will have to work hard, but it’s already done. We just have to accept it and move on.”