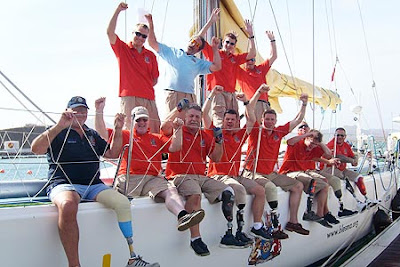 
They have stared death in the face, been shot at, blown up by bombs and suffered terrible ­injuries in conflicts around the world.


They have all lost limbs but none of them have lost their fighting spirit.


Now the 14 ex-servicemen with just 15 legs between them are making history as the first all-amputee sailing crew to ­compete in one of the worlds most ­prestigious yacht races.


Last night the band of brothers were making final preparations in Antigua for the RORC Caribbean 600, an epic voyage that will push them to the limit. The crew range in age from 27 to 72 and hold ranks from private to colonel, but share an extraordinary bond which they describe as a fellowship of shared experience.


The gruelling challenge, which will take up to four days over 605 nautical miles, looping round the Caribbean, starts at 10am ­tomorrow.


To add to the ­pressure the boat, which has no special modifications to make it easier for them to control, had an eleventh-hour change of skipper after amputee Colin Rouse broke his remaining leg skiing and had to drop out. He lost his left leg eight years ago when a gas leak on a yacht caused an explosion.


Colin, 52, a former RAF engineer from Torquay, Devon, said: The guys who make up this ­extraordinary crew are heroes. This is an ­immense challenge for able-bodied people, let alone with the ­challenges these guys face every day.


"They have ­incredible grit and ­determination. They have fought for their country and now they are ­fighting for their future. The aim is to help them realise their ­potential.


Paul Burns, 48, from Nottingham, will now skipper the 65ft yacht called The ­Spirit of Juno, but ­nicknamed the ­allotment by the crew because they will have to dig deep to reach the finish line.


Paul, a former corporal in the ­Parachute Regiment, had his left leg ­amputated below the knee, lost part of his right foot and suffered horrific burns in the ­Warrenpoint Massacre, when 18 soldiers died in an IRA bomb attack near the border of the Irish Republic.


Then 25 minutes ­later there was a ­secondary device and that caught the rest of the guys who had been there to support and tend to us. Twelve more died and it was the biggest loss of life since the last war.


I lay where the blast had thrown me, burning and my body smashed. My left leg was amputated four days later. I spent two years in hospital and rehab.


Following his recovery Paul was posted to the Joint Services Parachute Centre to train as a rigger, maintaining and packing parachutes.


He has also done nearly 1,000 jumps, even parachuting with the Red Devils, before taking up sailing in 1985, with the British Limbless Ex-Servicemens Association, going on to join an all-­disabled crew for a round-the-world race.


He said: I really have lived these last 30 years. I have tried to inspire all around me and show the IRA they could not break me.


Paul, who owns a three-legged dog he calls Tripod, added: This will be the biggest sailing challenge of my life, skippering a boat and crew twice as big as anything I have done before in one of the top races in the world.


Many of the crew have suffered ­horrific injuries, but we see this as no barrier to them competing.


Ultimately they will cope better with day-to-day life because through this, they will face problems and find a way round them. But we are not just ­inspiring our own. We are inspiring all those around us.


Colin Hamilton, 33, is a sergeant in the 3rd Battalion the Royal Regiment of ­Scotland The Black Watch.The dad-of-two, who has served for 16 years, had an above-the-knee right leg amputation after ­trying to save a ­colleague who was electrocuted in 2001. He said: I returned to Iraq in 2004 and Im due in ­Afghanistan next year.


Dad-of-three Jase Evans, 37, from ­Norwich, was a ­sergeant vehicle ­mechanic in the ­Royal Electrical and ­Mechanical ­Engineers. He lost his right leg below the knee after a car crash in 2001. He said: The ­camaraderie gives you a boost. I ­recently went diving in Egypt and we took a chap who was blind. It was a privilege to be part of that.


Lee Menday, 50, from Holbrook, Suffolk, was a training ­instructor in the Royal Navy. He had a below-the-knee ­amputation of his left leg in 2005 due to sporting injuries ­dating back to 1983 when he was in the Falklands. I now have a sea leg, he said. As a teacher I want to be a good role ­model and these guys are helping me do it.

until he lost his right leg below the knee after falling from a building during an ­anti-terrorist training exercise in 1986.

He said: The injury made me lose my ­confidence. Now Im taking back ­control of my life.


Nigel Smith, 50, was a mechanic in the Royal Navy. His right leg was amputated in 1977 after he was hit by a drunk driver. He said: I learned to sail with Blesma, which opened the door to me ­circumnavigating the globe on an ­all-disabled boat. Our motto was Crossing the latitudes to change attitudes.

I cant think of ­anywhere better.


Granddad Paul ­Hagan, 48, from Leicester, was a petty officer in the Merchant Navy for 10 years. He had his left leg amputated in 1998. He said: I have fought my ­demons. Its knowing, my God, here I am, no use of my legs, but scudding through the waves purely by our own physical strength. We are living proof we are not beyond rehabilitation.


Dad-of-two Phil ­Aucott, 40, from ­Nottingham, was a corporal in the Royal Corps of Transport. His left leg was ­amputated above the knee after a ­motorbike accident in 1994. He said: It took a long time to get my head around. But I went on to coach able-bodied athletes, have played county cricket and gone rock climbing.


Steve Gill, 40, known as Big Daddy, from Leics, was a private with the 2nd ­Battalion the Royal Anglians. He lost both legs and his right eye in 1989, when an IRA bomb went off inside a beer barrel in Belfast. Steve said: If my ­children can see me doing what Im doing with half a body, I want them to think, ­Imagine what I could achieve.


Tom Higgins, 61, a father-of-three from Macclesfield served in the Army for four and a half years until his right leg was ­amputated above the knee in 1971 after an accident. Tom said: Ive become quite an experienced sailor with Blesma. It gives me a sense of freedom and competing against able-bodied crews is as good as it gets.


Wayne H Harrod, 40, from Melksham, Wilts, is a ­colour ­sergeant with 1st ­Battalion the Royal Anglian ­Regiment. He lost his left leg below the knee in 2004 after a training accident. He said: Losing my leg was just a glitch. Its the fifth time Ive sailed with these guys. We laugh that when we get on board theres plenty of leg room!


John Reeves, 49, from ­Guildford, Surrey, served in the 3rd ­Battalion The ­Parachute Regiment.He lost the sight in his right eye while setting up a booby trap with a faulty detonator in training in 1983. He said: There is a unique bond and there is a feeling of unity in making sure our ­injuries dont conquer or ­overwhelm us.


Johnathan Jono Lee, 27, from Newark, Notts, is a lance ­corporal in the 2nd Battalion The ­Yorkshire Regiment.He lost his right leg below the knee in Helmand province in 2007 after his Snatch ­Land ­Rover was blown up. He said: Ive been back to work for 12 months now and want to ­return to ­Afghanistan.


The boats captain, Paul Burns, 48, from Nottingham, was a corporal in the Paras but lost his left leg in an IRA bombing. He took up sailing after nearly a thousand parachute jumps. He said: Parachuting, you have a piece of fabric to soar through the clouds. With a yacht the fabric helps you soar through the water so it was a natural progression.


The oldest crew member and Blesmas national chairman is Colonel Henry Hugh-Smith, 72, ex-commanding officer of the Blues and Royals and the Duke of Edinburghs former equerry. He lost his right arm after being shot in Northern Ireland. He said: It is a privilege to lead these men from serious injury to something they never realised they could do. 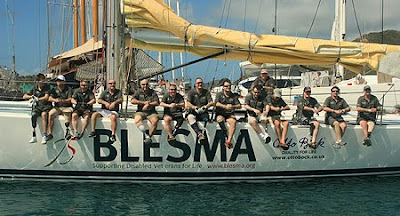 sarah.arnold@sundaymirror.co.uk
Posted by Bernabe at 9:53 AM