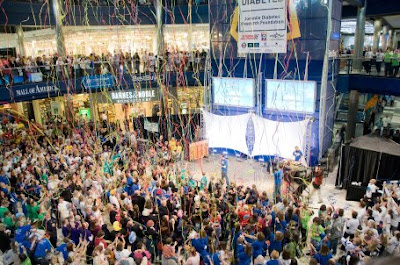 It’s less than a month until our favorite walk of the year: The Walk to Cure Diabetes at 8 a.m. Saturday, Feb. 26, at the Mall of America, sponsored by the Juvenile Diabetes Research Foundation (JDRF).

When we first started going to the walk years ago, one of our kids was in a stroller and the other wasn’t here yet. They are now 15 and nearly 13 and they’ve become big organizers, bringing their friends along, designing t-shirts and helping to raise money.

Our children, Sadie and Evie, love the excitement of the 20,000 walkers, the bands, jugglers and all the activity. But they also participate because their mother and my wife, Ann, was diagnosed with Type I (insulin dependent) diabetes in 1984, just as she was finishing graduate school. Despite the many complications of diabetes, she was able to travel first to China to get Sadie and then to Vietnam to get Evie to make our family. The girls have never known her without serious health issues resulting from diabetes including heart problems, neuropathy or lack of feeling in her legs, a deteriorating ankle and kidney failure, to name a few.

In 2001 she had a kidney transplant (generously donated by a loving older sister) and a few weeks later a pancreas transplant (donated anonymously by someone who had died). Miraculously, she now has normal kidney function and her pancreas produces insulin so she no longer needs to take four shots a day. The transplants stabilized her condition, but she continues to suffer from many complications and takes two dozen pills a day.

Ann can still walk on her own, but for big outings she needs to use a wheelchair. This year for the first time she will use her new electric scooter, which gives her the mobility and independence to zoom around the mall with the rest of the walkers. The kids are very proud of the scooter and their mom’s driving.

Participating in the walk is our way to show solidarity and common bond with the millions of people who suffer from diabetes and its ravaging long-term complications. As many as three million people, many of them children, have Type 1 diabetes in which the pancreas stops producing insulin, a hormone that enables people to get energy from food. Another 20 million, mostly adults but an increasing number of children, have Type 2, a metabolic disorder in which a person’s body still produces insulin but is unable to use it effectively.

The disease is a major contributor to kidney failure, heart attacks, nerve damage, strokes and blindness and it’s estimated that diabetes accounts for more than $170 billion in health care costs annually.

The organizers of the walk this year hope to raise more than $2 million for critical research, much of it done at the University of Minnesota.

We know what diabetes has done to our family. When we see the hundreds of young kids at the walk who suffer from this disease, we can only imagine what their families face in the years ahead. That is why the walk is so important. It is about taking a concrete step towards curing this dreaded affliction through research. And, just as important, it is about providing hope for those kids and their families, hope that some day they won’t have to take four shots a day, or check their blood sugars constantly, or suffer insulin reactions or face the prospect of losing their kidney function or their eyesight. Hope that some day they can live lives just like their friends who joined them on the walk.

Given all that, we never mind prodding and cajoling our friends and families to contribute or participate. It’s a great cause.

If you want to support the walk or participate or learn more, go to: www.walk.jdrf.org
Posted by Bernabe at 1:46 PM