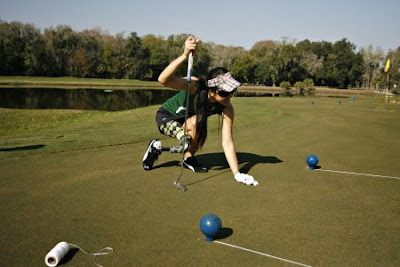 TAMPA — The hills and slopes of a Florida golf course may not look daunting to most, but to someone playing with a prosthetic leg, approaching the greens can seem a mighty trek.

"That's one of the biggest challenges they face," says Mike Rieth, a licensed prosthetist at St. Petersburg Limb and Brace. "It can be quite difficult walking up and down the little hills."

Still, he said, golf is the top sport among his clients, since it doesn't involve the pounding movements of other sports.

Now researchers at the University of South Florida want to help amputees get more out of the game. Scientists at the School of Physical Therapy and Rehabilitation Sciences invited a group of amputee golfers to Tampa Palms Country Club on Wednesday to find out if there was enough interest to pursue additional research in the field.

The answer was a clear yes.

Golfers received coaching from pros and tips from prosthetics researchers to improve their game and make better use of their prostheses.

Researchers from USF's School of Physical Therapy and Rehabilitation watched golf swings and listened in on conversations to learn of new challenges to study.

Rudy Salas, a Marine veteran who lost a leg below the knee when he stepped on a mine in Vietnam in 1967, has been playing golf for about three years. Salas, 64, is president of the Amputee Veterans of America Support Team at James A. Haley VA Medical Center in Tampa, and brought several buddies to the course Wednesday.

"The real benefit is that we get the prosthetic people paying attention to how we play the game," he said. That knowledge, he hopes, will lead to better prosthetic devices for all amputees.

USF's is among the leading centers for prosthetic research in the country, not only conducting research, but also fitting patients with prosthetic devices. Jason Highsmith, a physical therapist and researcher, says the center studies new devices and what's on the market to make sure that what works in the lab works in real life. The goal is "to come up with the best device for all activities of daily living and recreation," he said.

Highsmith's colleague Jason Kahle said it was useful, for instance, to learn that some above-the-knee amputees had a hard time locking their artificial knees so they can transfer their body weight while swinging a golf club.

"What if I could change a computer program for a microprocessor knee so the knee would lock only while playing golf? That would be something worth researching," Kahle said.

"We're always gathering ideas for the next venture. What do we need to look at next?"

James Bond, 53, of St. Augustine, was riding a motorcycle when he was hit by a drunken driver in 1987 and lost a leg above the knee. He has been golfing for four years.

His prosthesis swivels in the ankle, giving him good range of motion. But like many amputees, he hesitates to really test the limits of the device.

The USF experts, he said, "will get us to use the prosthesis to its full potential.''

Irene Maher can be reached at imaher@sptimes.com.
Posted by Bernabe at 9:36 AM

golf industry news I was reading your article and found very useful & helpful for those guys who wanna know about the same, I would like to read more in future!

Excellent article, hopefully some of these guys will enjoy golfing holidays in Spain in the future. With over 60 championship courses and a superb all year round climate they wont be disappointed.

Interesting article, thanks for sharing. I think golf can help many people with disabilities
and have seen many disabled players out many golfers to shame. There are some great locations to enjoy golf, Spain, USA, Turkey and Portugal to name but a few.