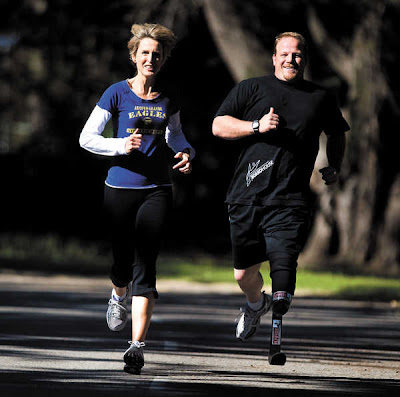 “When my daughter read the book, she started identifying with me in a new way,” said Mandy’s father, Greg Birkholz, who lost his leg in a motorcycle accident in 2000. “I had shared (my experiences) with my daughter, but for her to read it in the book and for her to look through it as the eyes of (the main character)… it suddenly made sense.”

“The Running Dream” offers an in-depth look at the world of amputee athletes, delving into one runner’s physical and emotional recovery from a life-shattering accident.

“Once I started reading ‘The Running Dream,’ I could not put it down,” said Hasay, now a sophomore studying physiology at the University of Oregon. “Wendelin … really was able to capture the passion and love for the sport that myself and all runners share.”

With its serious subject matter and gritty details, “The Running Dream” is a departure of sorts for Van Draanen, the award-winning author of the Sammy Keyes mysteries, the Shredderman books and other young adult novels. She’s also written a handful of stand-alone titles, including “Confessions of a Serial Kisser” and “Flipped,” which was recently made into a movie.

“I battled with myself about writing this book,” said Van Draanen, who worked on “The Running Dream” for about three years. “There was so much about the subject matter that I had no knowledge base for.”

Nonetheless, she said, “Jessica just kind of took root in my brain.”

Jessica Carlisle, the 16-year-old protagonist of “The Running Dream,” loses her right leg below the knee in a tragic bus accident. The teenage track star initially gives up hope of ever running again, but her steadfast friends and loving family help her get back on her feet.

According to Van Draanen, the seed for “The Running Dream” was planted when she and husband Mark Parsons ran the New York City Marathon in November 2007.

As they reached the 12-mile mark, the pair came upon a sighted runner tethered to his blind friend.

“I can’t even make it across my room with my eyes closed,” Van Draanen said. “How do you make it 26.5 miles on a crowded race (route) with hundreds of other people?”

A sprinter during her time at Cabrillo High School in Lompoc, she typically heads out for a run four days a week, covering five or six miles in a stretch. Over the course of five marathons, she’s encountered “very inspirational people” at every mobility level – including those who use prosthetic limbs and wheelchairs.

“Here you’ve got two legs and it’s the toughest thing you’ve done,” Van Draanen said. “You realize that your tough is nothing like their tough.” In order to accurately capture the amputee experience, Van Draanen sought help from the likes of Arroyo Grande prosthetics expert John D. Hollingsead, Santa Maria track coach Greg Sarkisian, and Dana Cummings, executive director of the Association of Amputee Surfers in San Luis Obispo. She even followed AmpSurf co-founder Greg Birkholz through the process of getting a new leg.

“Every appointment I had for the making of that leg, from when the socket was fitted to the final prosthetic, she was there,” said Birkholz, who works as a substitute teacher in Santa Margarita. “It gave a new appreciation for an author like Wendelin who really does her homework first. If she didn’t have it right, she wanted it right.”

As the executive director of the World Hope Foundation, a non-profit organization with operations in Ghana, India and Nigeria, Birkholz has helped fellow amputees walk again.

Getting a prosthetic limb “changes their life dramatically,” Birkholz said. “They become independent.”

Although Americans’ attitude toward amputees has improved, due in part to increasing numbers of soldiers returning home with damaged or missing limbs, Birkholz said he and his peers still face a certain stigma.

“It’s so easy to overlook people who are different than we are. It’s so much easier not to interface or engage,” Van Draanen said. “Part of writing this story for me was breaking down the fear and realizing that behind the disability there’s a person.”

That point is driven home in “The Running Dream” by Jessica’s friendship with Rosa Brazzi, an intelligent young woman with cerebral palsy. (The character was inspired in part by Pismo Beach pilot and activist Adele Schneidereit, who has cerebral palsy, Van Draanen said.)

As Jessica tells a news anchor, the goal is “to have people see her instead of her condition. That’s all anybody with a disability wants.”

Ultimately, “The Running Dream” is a story about hope and the indomitable human spirit, Van Draanen said.

“The message of making it through your darkest hour and finding there is life after that is something that everybody can relate to,” she said.
Posted by Bernabe at 2:31 PM