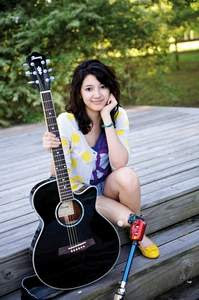 When she was 11 years old, Emily Garcia discovered she had a rare and aggressive form of cancer. Today, at 19, she is the face of the Blue Star Foundation.

Started by the Grand County Blues Society, Blue Star, based in Winter Park, has grown into a nationwide program dedicated to connecting young cancer patients to the guitars of their dreams.

Garcia, who lives in south of Houston, Texas, received her Blue Star guitar after one of many surgeries.

"I wasn't able to go to cheerleading as much ... The guitar really helped me cope, kept me distracted."

Her first sheets of music were Taylor Swift songs.

"It really does give you a creative outlet stress reliever. You can take it out on the guitar. It's really special whenever you are giving it to somebody who really needs it at the time they are going through," she said.

An unexplained limp
In 2002, doctors discovered a tumor in Garcia's right leg when she started limping for no apparent reason. She was diagnosed with osteosarcoma (bone cancer). She underwent intensive high dosage chemotherapy for seven months and then had surgery to amputate her right leg just above the knee, followed by another six months of chemo. She finished treatment in November 2003.

Two months later, she went on a ski trip for amputees and fell, fracturing her femur. She skied around for the rest of the weekend in a sit ski before realizing that her leg was broken.

She spent the next three months in a body cast and then began rehab, learning to walk on her prothesis that spring. She fell again in September, fracturing her leg again. Doctors started her on weekly IV treatments to strengthen her bones after the cancer treatment had further weakened her bones.

In February 2004, Garcia relapsed. Doctors found a tumor in her left lung. She underwent surgery in May and began chemotherapy again. This time her kidneys shut down and she spent several weeks in the hospital undergoing painful treatments to restart her kidneys.

In September 2004, she returned to school for the first time since her diagnoses and became a cheerleader for her school. Things were great, for a while. But, in January 2005, the tumor reappeared in her lung, taking over almost the entire organ. Garcia started treatment again. That summer, she was on radiation treatment for seven weeks.

She returned to school in the fall, cheerleading between treatments. It wasn't until the fall of 2007 that the tumors had shrunk enough to do surgery. The surgery involved removing five ribs and a large portion of her lung.

Afterwards, she continued treatments and rehab so that she could cheer again.

She finished treatment in May 2008. Pain returned, but this time it wasn't clear why. Doctors looked for months before discovering a tumor in her intestines in September. She had the tumor and a portion of her intestines removed in December, and began yet another round of chemo in January 2009.

She got through those tough times by playing her guitar, drawing and writing in her journal.

continue story click here
Posted by Bernabe at 9:56 AM