Defining an Olympian: How a leg amputee is testing the rules of sport 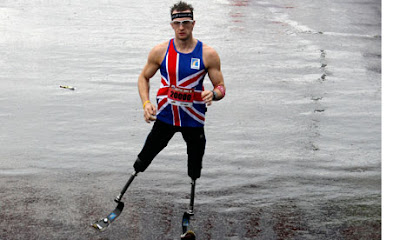 Is it fair that Richard Whitehead cannot compete in the Paralympic marathon, despite being one of the world's best paralympic runners?
Imagine Usain Bolt going for gold in the marathon at the Olympic Games 2012. It would never happen, of course, as the Jamaican sprint world record holder has repeatedly said even 400m is too far to run for his liking. But what if there was a world-class athlete who loved competing in the sprints as much as the marathon?

There is. On Sunday the extraordinary Richard Whitehead, a double leg amputee and already a 200m world champion in the T42 category, will run the London Marathon.

With a personal best of 2hr 42min 52sec, the 34-year-old has convinced most that he is a world-class paralympic athlete at both distances despite having only begun running marathons in 2004. Now coached by the British Olympian Liz Yelling, who is also competing in the marathon this weekend, Whitehead has serious designs on double success at London 2012. But the authorities have other ideas.

There is only one marathon event in the Paralympics and it is for T46 – arm amputees – only. Despite there being a clear disadvantage in competing against athletes who have both lower limbs, Whitehead – whose 2:42:52 time is inside the top 10 world rankings for T46 athletes – is desperate to have his chance against them.

The Nottingham-born athlete mounted a legal challenge against the International Paralympic Committee's (IPC) world championships ruling at the court of arbitration for sport – and lost – but he is determined to run in 2012.

Despite being sympathetic to Whitehead's plea, the IPC has bigger concerns to address. The pressure is on to make the 2012 Paralympics as attractive to the public and sponsors as possible. One huge element in that task is making paralympic sport – riddled with complicated sounding disability classifications – easier to understand. There are a whopping 200 different medal events in the track and field paralympic world championships – a figure that the governing body wants to reduce for 2012, and the IPC argues that combining classifications would further complicate things for the public.

continue story click here
Posted by Bernabe at 11:58 AM