Written by
Kathryn Bursch
St. Petersburg, Florida - For Roy Howe, blue skies and blue water are a perfect way to avoid the blues.

"It's peaceful, it's relaxing, it's enjoyable," he says while paddling across the waters of Boca Ciega Bay.

Wednesday afternoon was actually Howe's first time in a kayak and most of the other people gliding near him are in the very same boat. They're members of an activity group called "A Step Ahead" and it aims to get people trying new things.

Besides an adventuresome spirit, group members also have another thing in common; they're all missing a limb... or two.

"There are other support groups out there, but we're more than a support group, we're an action group," says founder Jamie Kay Weil.

Weil is a former nurse who now works in the field of prosthetics. She says that in many cases amputees can actually be more active than before, because now the source of their infections and pain is gone. 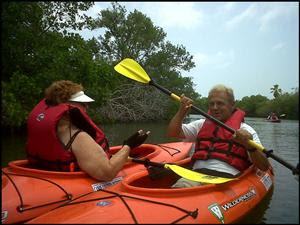 Last month the group went sailing and next month it's swimming with the manatees. And while there's no peer pressure, it helps when everyone takes the plunge.

"If he can get in, I can get in," says Barbara Schickedanz, while waiting her turn to plunk down in a kayak.

Any amputee (even before surgery) can join the group and it has members of all ages. And most of the activities are free, because businesses help out. On Wednesday, Canoe Country Outfitters provided all the kayaks.

On this outing, so far so good; the only person to get wet was the instructor who tipped on purpose. So even with all the water around, you get the feeling that nothing can dampen this group's spirits. One woman gliding by exclaims, "I love it!"