Amputees get back up and running 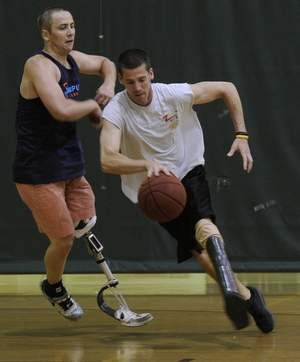 When Daryl Farler lost both of his legs, he doubted that he’d be able to walk again. Five years later, he’s running around playing basketball.

Farler was 25 when a dog scratched his left eye and he developed a serious strep infection. The medication he needed to stay alive restricted blood flow to his extremities and he lost both legs below the knee and several fingers.

He was in shock and initially clueless about his options, and the fear of being helpless fueled his depression.

“There’s a lot of depression,” says Farler, who is now 30 and lives in Murfreesboro. “I lived for 25 years with feet.”

What Farler learned is that advances in prosthetic technology have made it easier for amputees to be as active as anyone. He runs. He hunts. And now he has joined the new United Amputee Basketball League — a stand-up, three-on-three, basketball league for people who have lost a leg. He will be playing for a team that’s sponsored by Amputee Associates, a Nashville company that made his artificial limbs.

Click here for more of the story
Posted by Bernabe at 10:35 AM