A day of pushing limits for wheelchair users 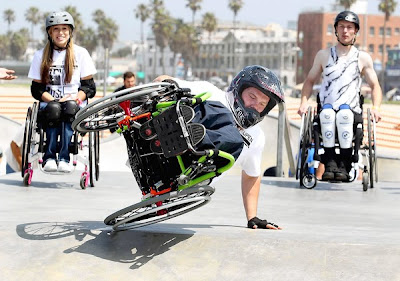 The once-avid motorcycle rider is not one to shy from adventure. But to dive 4 feet down a steep concrete embankment — in a wheelchair, while paralyzed from the waist down?

"Yeah," Molo said, gripping his wheels a few feet from the edge. "I'm gonna have to take a moment to think this one over."

A skateboarding park on Venice Beach transformed into a training ground Saturday morning as several dozen paraplegics and quadriplegics learned to drop, roll and dive on curved walls as tall as school buses. They did so all while sitting in their own wheelchairs.

The event was held by Life Rolls On, a group born out of the Christopher and Dana Reeve Foundation to help people with spinal cord injuries stay active. They teach surfing and this year, for the second time, skateboarding.

Participants, some as young as 6, showed up strapped to wheelchairs with legs that don't work or barely do. They're survivors of car crashes, shootings and surgeries gone wrong. Some were born with spinal defects.

Molo, 36, was struck by an SUV as he rode his motorcycle to work one day five years ago. The driver was on her cellphone. She made a left turn on a red light and plowed head-on into the computer repair technician.

For almost two years, Molo stayed in his house, too depressed to go out. He watched television, played computer games. Mostly, he slept. Then he found Rancho Los Amigos National Rehabilitation Center in Downey, which encourages wheelchair sports.

Three buddies from the center egged him on until he finally let go and took on the embankment — in one smooth, perfect swoop.

click here for more of the story
Posted by Bernabe at 11:53 AM