October 11, 2011 (Hamburg, Germany) — In the future, amputees might merely repeatedly watch a virtual version of their lost limb in motion to be rid of their phantom limb pain.

Researchers believe that virtual reality, which uses sensory illusions in real time, can reverse the remodeling processes within the brain that occur in most patients who lose a limb. The idea is to get the brain to believe that the limb is still there, so the pain-inducing conversion processes do not occur. 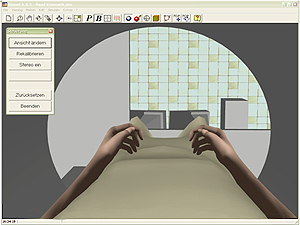 The virtual approach has several advantages over the standard mirror box approach because it uses artificially modified movements instead of merely normal mirrored ones, said Martin Diers, PhD, from the Department of Cognitive and Clinical Neuroscience, Central Institute of Mental Health, Medical Faculty Mannheim, University of Heidelberg, Germany

Dr. Diers' virtual reality study was among several presented here at Pain in Europe VII: 7th Congress of the European Federation of IASP Chapters (EFIC) that suggest it may be possible to prevent or even reverse the postamputation maladaptive cortical reorganization that causes phantom limb pain.

Research has already shown that using mirrors to give patients the optical impression that their missing limb is still present can reduce phantom limb pain, and that brain activation differs between amputees with and without pain. Dr. Diers' group conducted a longitudinal study comparing brain changes before and after a classical mirror box treatment in patients with phantom pain to better understand the mechanisms of mirror treatment.

To determine whether the virtual mirror box is comparable to the mirror box in terms of brain activation, the researchers conducted a pilot study. They put 20 healthy volunteers inside a magnetic resonance imaging scanner with their left arm hidden, and fitted them with head-mounted 3-dimensional goggles. The virtual reality process transfers images of movements from 1 hand (the right hand) onto the other (hidden or amputated) hand. The viewer sees his or her body with both hands moving, but is actually moving only the right hand.

During a second experiment, the volunteers moved their right hand in front of a mirror and could see their mirrored right hand as their left hand.

"In both of these conditions, you have movements of the right hand, but you are seeing movement of both hands," said Dr. Diers. "The difference is that one is a mirrored image and one is in virtual reality."

With the virtual reality technique, there was significantly more activation in the primary somatosensory cortex contralateral to the actual movement. "So, both conditions are quite similar in terms of brain activation, but the virtual reality mirror box has some advantages during the training from which patients could benefit," said Dr. Diers.

It also has other, technical advantages. The mirrored limb always moves opposite to the intact limb, which is unnatural, especially for the leg. The position of the arm inside a magnetic resonance imaging scanner is also unnatural, and even uncomfortable. Instead of using only responses from the opposite remaining limb, virtual reality can include the residual limb by capturing motion data directly from a patient's stump.

Dr. Diers estimated that it would take 15 minutes a day for 4 weeks to "trick" the brain into thinking the limb still exists, and for the phantom pain to subside. His research indicates that the pain is reduced for at least 2 months.

In the future, virtual reality applications will likely be used instead of the classical mirror box, but it will take some time for them to reach clinical practice, partly because of the expense, said Dr. Diers.

Up to 80% of amputees experience some phantom limb pain. Factors that influence whether a patient experiences this pain include age (those who lose a limb younger than about 7 years do not normally feel this pain), the degree of preoperative pain (less pain before the amputation normally leads to less phantom pain), and genetics. The use of a myoelectric prostheses or sensory discrimination training at the stump can also improve phantom pain.

This research is part of the European Research Council–founded PHANTOMMIND project. A second funded project that uses magnetic resonance imaging carried out by Dr. Diers and others, and presented at the meeting, showed that patients could learn to regulate their brain response.

This study included 10 healthy control patients who completed 24 neurofeedback sessions on 4 consecutive days. Their objective was to regulate activation in the posterior insula and anterior cingulated cortex either up or down in response to painful electrical stimulation.

"This method seems promising not only for phantom pain patients, but also for chronic back pain or generalized pain syndromes," Professor Herta Flor, PhD, from the Department of Cognitive and Clinical Neuroscience, University of Heidelberg, commented in a press release. "With these possibilities for targeted control of the body's own pain perception mechanisms, a whole new world opens up that could soon free us, in many areas, from dependence on analgesic medications, with all their diverse side effects and risk of complications."

Another approach being studied is the rubber hand illusion paradigm that involves replacing the missing hand with a realistic artificial limb and stroking the real and replica limb simultaneously, while the patient focuses on the rubber hand. After some seconds, most patients experience the rubber hand as his or her own hand.

Yet another potential treatment discussed at the pain meeting was the administration of ketamine pre- and postoperatively. Researchers at the Pain Clinic, University Hospital, Martin, Slovak Republic, carried out a blind, prospective, placebo-controlled study that included 31 patients with diabetes who were to undergo lower limb amputation.

After receiving anesthesia, 25 patients got a 0.5 mg/kg bolus of intravenous ketamine. After surgery, these participants received a 48-hour postoperative intravenous infusion of either 0.1 mg/kg/hour or 0.05 mg/kg/hour of ketamine; those who did not receive ketamine got magnesium.

The authors have disclosed no relevant financial relationships.

Great post. I've heard about phantom pain, but I didn't know half of the stuff here. Very interesting.