WASHINGTON – In a city dedicated to monumental sacrifices, there’s one that stands strong and never surrenders.

“It just gives me chills,” says Jennifer Phillips of Virginia Beach. “I can’t believe he’s out there.” 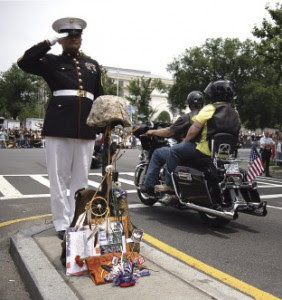 Retired Marine Staff Sergeant Tim Chambers has stood at this post since 2002.”It’s an extremely long time to hold a salute that long,” says Air Force Master Sergeant Russ Ware of Columbia, MD. “Takes a lot determination and a lot of discipline. This guy does it every year.”

With a stiff spine and straight shoulders, this lone marine stands at attention as the Rolling Thunder rumbles by…for more than three hours.

“They zoom by me and I’m getting an eyeball at them,” says Chambers. “I’m trying to give every one of them that ‘Welcome home’ they didn’t get.”
Chamber says it started as a spontaneous ‘Thank you’ nine years ago but has now become his moral obligation.

Retired Marine Major Larry Carmon was one of thousands who came to watch Chambers. “I did 28 years in the Corps,” Carmon says. “I was a drill instructor. I’m totally impressed with this young man. Totally impressed.”

Carmon says holding a salute this long is nearly impossible for a healthy Marine. It’s unthinkable for a wounded warrior.

“He has a broken wrist? God Bless him.”

Only the slightest of a tremble gave Chambers away. A broken wrist that should have been in a cast was instead held high in a salute.

“I knew something was wrong!” Ware says. “He started to waver a little bit today. That’s dedication! That’s service before self.”

But as one hour bled into the next, the temperatures started to soar.

“If you actually watch him right now, he’s in distress,” says Dave Macedonia. The veteran says he started ferrying water and aspirin to Chambers when it became apparent the solider was in pain. “You know, veterans help each other,” Macedonia says. “If he falls down out there, we’re going to help him.”

But Diane Hoge says she knows her son would never let that happen. “He was always very determined,” Hoge says. “Everything he does, he puts 150% into it.”

She says her son got it from his grandmother Anne DeSanis. Every year, the 81 year-old quietly stands on the sidelines and refuses to sit down until her grandson finishes what he started.

The Lone Marine has now become a bit of a celebrity. People flock to this corner just to get a picture with of him. But rather than let it go to his head, Chamber says he hopes others will follow his example.

“I’m doing this because America needs to see this,” he says. “I want them to emulate it any which way they can across the country.”

Because, for Staff Sgt. Tim Chambers, when it comes to remembering the men who serve, you never give up. You never surrender.

Rolling Thunder is an annual motorcycle rally that is held in Washington, DC during the Memorial Day weekend to call for the government’s recognition and protection of Prisoners of War (POWs) and those Missing in Action (MIAs). About 400,000 veterans will roar across Washington, DC on their motorcycles as a tribute to American war heroes.
Posted by Bernabe at 9:00 AM