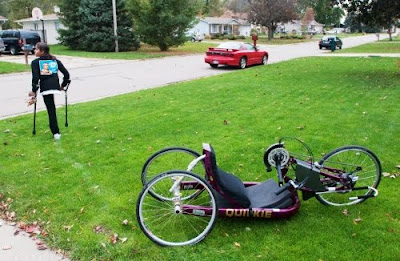 Josh Radtke | The State News
Kinesiology senior McKayla Hanson waits for her brother Jacob, 13, to bring up the other handcycle into the driveway after the two finished an afternoon ride. Due to her high amputation, Hanson rides the special type of bike during the running and bicycle portions of the triathlon. She travels to California this week to compete in a half Ironman Triathlon, a stepping stone to the Paralympic games, where she is determined to one day be a competitor.

After her right leg was amputated at age 7, McKayla Hanson gave up on rollerblading, biking and her chances at a normal life.

In elementary school, Hanson, who is now a kinesiology senior at MSU, purposely broke her prosthetic leg to get out of wearing it to class.

She’s been training for months to participate in the 2011 San Diego Triathlon Challenge on Sunday and today, she’s leaving for California.

“I hate the fact that most people I see that are physically disabled are either overweight or obese,” Hanson said. “Just because you have a disability doesn’t mean you should eat McDonald’s every day or sit on your butt because your back or leg hurts — you can’t let that get to you.”

“It’s huge for somebody that’s injured,” Long said. “It’s not only getting out; it’s realizing that you can do active activities.”

A step behind
Hanson’s parents put her into foster care along with her sister to give them a chance at a better life.

When Hanson was living with her first foster care family, she began feeling pain in her right leg.

She cried from the pain, but her foster parents told her it was growing pains. A tumor was visible on her leg.

In the Hanson house, where she went next in foster care, that kind of neglect didn’t last.

Her new foster parents, who later adopted her, told her she had a rare form of bone cancer — rhabdomyosarcoma.

From the hip socket and pelvic bone down, Hanson’s right leg had to be amputated.

“I was more happy than scared because of the pain I felt,” Hanson said.

Doctors said she’d never walk again, but her family pushed her to overcome her disability.

“She didn’t have a disability when she was here; she was one of the kids,” McKayla’s mother, Elisa Hanson said. “When it was her time to clean, (she cleaned).”

McKayla Hanson’s mother was by her side the first time she rode a bicycle after cancer claimed her right leg, and now as she’s training for the triathlon this weekend.

“They said, ‘You can either lay in bed and feel sorry for yourself … or you can get up and do something,’” McKayla Hanson said.

“My physical disability has never stopped me since they told me that.”

Leaps and bounds
Although her right leg was gone, McKayla Hanson had the heart of an athlete growing up.

She began swimming in middle school, then began rock climbing and handcycling.

Her athletic career was jump-started when she got a new prosthetic leg from the Challenged Athletes Foundation, an organization that helps raise money for disabled athletes.

“We want them to not feel like there’s something missing in their life.”

With a new leg and ambitions to participate in triathlons, McKayla Hanson began working with a coach on the handcycle — an arm-operated bicycle.

Ray Bailey, a member of the Tri-County Bicycle Association. never taught someone with a disability before and never used a handcycle.

It’s been a learning experience for both of them, but since they started working together, she’s gone from about 9 mph to about 14 mph average on her handcycle — enough to be competition at the triathlon next Sunday, Bailey said.

“I’ve pushed her a little bit, only to the point I can see it on her face,” he said.

McKayla Hanson also rides with the Tri-County Bicycle Association and the Fusion Cycling Team.
To members, it’s more than a way to exercise.

“If we see people are struggling in the cycling community, we kind of like to help,” Bailey said.

Long, who also leads the Fusion Cycling Team, met McKayla Hanson at a race about a year ago.

Getting to know her and other disabled athletes provides support and hope for him.

“You’re learning from someone that’s gone through the same road as you,” Long said.

“You can talk to a lot of people, friends and family, that haven’t gone through a disability, but they can’t really understand unless they’ve gone through it.”

At MSU, McKayla’s studying to become a physical therapist — to give back to the disabled community, as she was helped by others.

“I really would like to work with the disabled community in any way that I can,” she said.

“Whether it be to incorporate more physical fitness for them, start my own organization or anything along those lines, but I really want to work … for those who are physically challenged.”

McKayla Hanson’s training won’t be over when she finishes the triathlon in San Diego.

After that, her training for the 2014 Paralympics begins.

“She’ll take something competitive, not necessarily just a marathon, but get ready for the triathlon and take it to the extreme limit,” Long said.