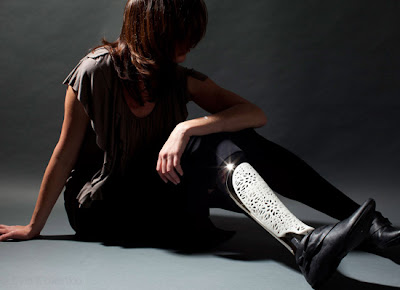 Bespoke Innovations has gone out on a limb by building a new business around a bold idea – that prosthetic legs can communicate a message of personal style more than disability.

In a packed lecture hall at Stanford last week, Scott Summit, Bespoke’s chief technology officer and a Stanford engineering lecturer, told those of us in the audience about his start-up company’s vision — to bring humanity and self-esteem back to people who have suffered traumatic limb loss.

Using a 3D scanner, technicians create a digital image of an amputee’s surviving limb and create a mirror image of that morphology using parametric computer modeling. They feed this data into a laser-powered 3D printer that fabricates a custom superstructure, which can then be adorned with fashion-oriented materials like wood, metal, cloth, and leather. “We can create a personalized limb in 30 hours for about $4,000,” Summit told us.

Both utilitarian and beautiful, the Bespoke staff works with people to customize the designs and materials to reflect individual personality and tastes. Some are finished with ballistic nylon or polished nickel. One was covered in quilted leather, like a Chanel handbag. For a military veteran with a love of tribal tattoos, the team scanned a favorite tattoo design from one leg and fabricated the fairing using that theme. A competitive soccer player who lost his leg to cancer chose an aircraft-like honeycomb design that allowed him to play soccer again.

Summit, who works alongside co-founder Kenneth Trauner, MD, a Bay Area orthopedic surgeon, hinted that his interdisciplinary team of designers, engineers, physicians, and entrepreneurs has other innovations under wraps that will push the boundaries of human prosthetics and be “the coolest things you’ve ever seen.”

A video of the lecture is available on Stanford University’s Entrepreneurship Corner website.
Posted by Bernabe at 9:45 AM

I never read this type of article before. I appreciate you for the article you have written. Thanks.
For more information :