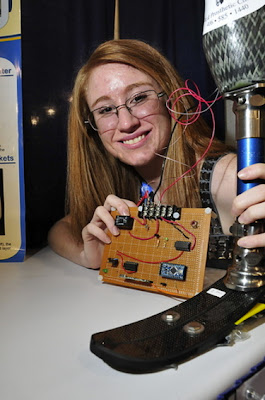 Katherine Bomkamp is seen with her invention, which is designed to eliminate phantom pain felt by amputees (Photo Courtesy of Intel )Darci Marchese, wtop.com


WASHINGTON -- Katherine Bomkamp was struck by what she saw the first time she visited Walter Reed Army Medical Center with her father, a member of the U.S. Air Force.

"Sitting in waiting rooms were all these very young amputees returning from Iraq and Afghanistan. That really got to me. They were 18,19 years old, young kids," she says.

The Waldorf teen, 16 at the time, says she talked to the men and women who had lost their limbs at war about phantom pain -- the pain an amputee feels in the limb that's no longer there. The pain, she says, is "caused by the brain that automatically sends signals to a limb to move. The signals get caught in the severed nerve endings, causing pain."

About the same time as her visits to the hospital, Bomkamp's tenth grade science teacher encouraged the North Point High School students to complete a project that could have an impact.

Bomkamp decided to study phantom pain, hoping to find a way to prevent it without the use of drugs. Over time, she invented a holistic prosthetic device she now calls the "pain free socket," a device that uses heat to force the brain to focus on high temperatures produced through thermal-bio feedback, rather than send signals to the nonexistent limb.

The invention won her several awards at local and national science fairs. But she didn't stop there.

Now a 19-year-old sophomore at West Virginia University, Bomkamp is working to have her device commercialized. She's received one patent for the "pain free socket" and says a major prosthetic company has expressed interest in it. She's even created her own company.

She credits the university for helping her develop the device and to raise funding for it.

"Before I came to WVU, this was a project. But now it's become a viable product that could go on the market," she says.

Bomkamp is excited to give back to wounded warriors. She says the device will be tested on amputees and she hopes it will be on the market in just a couple of years.

Because of her accomplishments, she becomes the first West Virginia University student to be inducted into the National Museum of Education's National Gallery for America's Young Inventors. And last week, she was named one of Glamour Magazine's "21 Amazing Young Women." The distinction was given to young women across the country for changing the world through service and innovation.
Posted by Bernabe at 8:56 AM