"I Can Still Be a Mother" 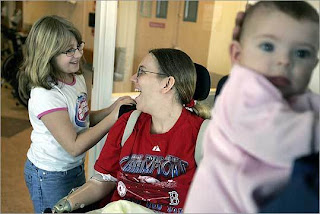 "I Can Still Be a Mother"
Her limbs gone but her heart strong, Monica Sprague begins the long road back to the life she knew, driven by the desire to be there for the husband who stood by her and the daughters who need her.

THE NURSES CHANGING the dressings on Monica Sprague's arms and legs a few times a day developed a unique routine. Most important was shielding Monica from seeing her own limbs - so they would distract her, ask her to close her eyes, or simply stand in her line of sight. And then they would slowly unwrap the cream-colored gauze slick with Vaseline from the tips of her fingers all the way up past her elbows and from the tips of her toes up past her knees. The limbs were dead, all black and shriveled, hard for anyone to look at, never mind the person whose own body they were attached to, and so once the bandages were off, a fresh coat of Vaseline was applied and fresh gauze delicately wrapped on.
related
{PART 1 of 2} Saving Monica
{PART 2 of 2} 'I Can Still Be a Mother'
Video Monica at home
photos: Part 1 Part 2

"Her hands were the most horrendous I'd ever seen," says Kate Davignon, one of the nurses in MGH's surgical ICU who helped change Monica's bandages. "Her fingers were the size of a child's. They were all shriveled, small and thin. They were black through and through, the nails and the skin."
The nurses were successful at protecting Monica from seeing her wounds, until one day when she stopped Davignon.
"I want to see," Monica said.
It was early in September 2007. Barely one month ago, Monica had given birth to a beautiful daughter, her second, and had been so close to going home healthy to her apartment in Ayer and starting her new life with her fiance, Tony Jorge, their newborn, Sofia Maria, and Madalyn, her bubbly and precocious 9-year-old from her first marriage. But that all seemed so long ago. Now Monica, a passionate, spry, and outgoing 35-year-old woman with a perpetual smile, was slowly accepting the hard truth that a rare and mysterious flesh-eating bacteria had nearly killed her in the hours and days after her delivery at Emerson Hospital in Concord and that she was alive only because of the fast and aggressive care she got from trauma surgeons at Mass. General.
But even they were not miracle workers. The bacteria were gone from her body, but not before doing irreparable and devastating damage. The only way she was going to live, the only way she was ever going home again was if she let doctors amputate both her arms and both her legs. Those surgeries were now days away, and Davignon, all of 28 and an MGH nurse for five years, had hoped to make it to the operations without Monica ever glimpsing her dead limbs. But Monica had insisted.
"Well, they're really pretty bad," Davignon replied when Monica said she wanted to look. "I'm not sure if you want to see."
"No, I want to see. I want to know what I have to work with."Continued...

great story
wish could be as great as she