Touch Bionics expands in US to meet demand for prosthetic hand 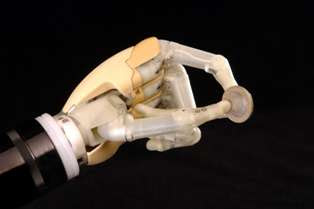 
Scottish company Touch Bionics, developer of the world’s first commercially available bionic hand, has set up a US subsidiary, Touch Bionics, Inc. to help meet the growing demand for its revolutionary prosthetic hand.

The company opened new headquarters and a development and manufacturing facility in Livingston, Scotland in January this year.

Touch Bionics launched the i-LIMB Hand in July 2007, and the product has now established itself as one of the hottest devices in the world prosthetics market. The company expects that its clinical customers will have fitted more than 100 patients, from all over the world, by the end of February 2008, representing very strong performance in such a specialist field.

“The level of global enquiries since the launch of the i-LIMB Hand has resulted in a very busy six months for Touch Bionics and we are hitting the top end of our expected sales growth,” said Stuart Mead, Touch Bionics CEO. “The response from patients and clinics alike has further convinced us that the market is ready for our product, meaning that this new facility is vitally important to helping us maintain our rapid growth.”

“We are performing well in export markets — 94% of our business is coming through exported product, and the USA is proving to be our biggest market,” added Mead.

Following its commercial launch, global market perception of the i-LIMB Hand has evolved from exciting new technology to a widely accepted clinical option in the space of six months. Touch Bionics has now established relationships with a wide range of clinical companies – from the world’s largest to smaller, independent clinics.


“Having a stronger US presence enables Touch Bionics to better serve its growing network of partner clinics in America, the company’s biggest market,” said Touch Bionics CEO Stuart Mead. “With more US clinics offering the i-LIMB Hand, growing numbers of American amputees will have the option of being fitted with the most advanced prosthetic hand on the market. The fact that we’re at the top end of our sales projections shows there is a ready market for our product.”


More than 70 patients worldwide have been fitted with the hand and the company anticipates reaching the milestone of 100 fitted patients by the end of February 2008.


Jake Wood, CP, FAAOP, sole certified prosthetist and co-owner at Orthotics and Prosthetics Associates, Inc. in Milwaukee, WI said, “I am so appreciative of what they have made available for my patients. Touch Bionics technology allows me to do my job better, providing patients with a solution that enhances and improves their day-to-day lives. Due to the anthropomorphic, dexterity and functional capabilities of the i-LIMB Hand, it’s in a league of its own, technology-wise.


“This is the first time in my 30 years in the prosthetics business that I felt I was truly delivering an arm to the patient,” continued Wood. “I never thought in my lifetime that I would ever see this technology.”


In addition to the developments in the US, Touch Bionics has also now cemented European partnerships with clinics and distributors in Germany, Turkey, Hungary, Romania and the Benelux region, with more global partners signing up in countries such as South Korea, Argentina and Brazil. In the space of just six months, global market perception of the i-LIMB Hand has evolved from exciting new technology to a widely accepted clinical option.
Posted by Bernabe at 8:55 AM